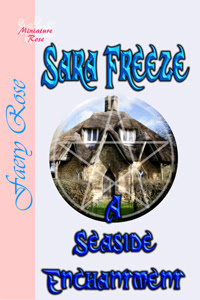 A Seaside Enchantment
by Sara Freeze

After being seriously wounded in the line of duty, Justin has retreated from the world by renting an isolated cottage along the English coastline. The next thing he knows, he's plunged into a time-travel adventure as he meets the trapped spirit of a lovely nineteenth century lady, Julia.

As Julia explains, she's been awaiting her champion. All he has to do to free her from her entrapment as a spirit is to perform a spell, travel 200 years into the past, find the villain who first worked the spell, and then vanquish the fellow. Easy, right? Justin suspects not, but he's prepared to take on the world, in whatever time period, to fight for his new love.

I love the premise of this book. Rugged modern cop recovering from a wound received in the line of duty meets a regency-era ghost who needs him to defeat the villain who put her in that state. Ms. Freeze did it justice in the small space she had to work with. Snappy dialogue, intriguing characters, and the thrill of a modern man going back in time to champion a nineteenth-century lady really make the short story shine.

There were a couple of plot things that didn’t really work for me, though. I had a difficult time believing that either Justin or Julia would be ready to make a lifetime commitment to each other after knowing each other for less than twenty-four hours, regardless of the strange magical circumstances. I also had difficulty understanding how the time travel system in the story works. One character goes back in time with a simple spell. Another is a witch who can move through time at a whim, and yet another who might not be able to get back to her own time if she moves to another.

I think that “A Seaside Enchantment” is a short story who wants to be a novel. I’m so fascinated by Justin and Julia. I want to know more about them and how they work as individuals, what makes them attracted to each other, how they’re compatible, and I want to see them fall in love. I hope that Ms. Freeze has an opportunity to write a longer version. If she does, I’ll be first in line to buy it.

Review by Daisy
Posted by Long and Short Reviews at 4:03 PM