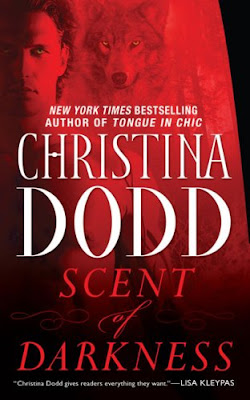 Scent of Darkness
By Christina Dodd

Ann Smith loves her handsome, dynamic boss, Jasha Wilder, but her daring plan to seduce him goes awry when she encounters a powerful wolf who-before her horrified eyes-changes into the man she adores. She soon discovers she can't escape her destiny, for she is the woman fated to break the curse that binds his soul.

A delicious bit of world building can be found in Christina’s new book, Scent of Darkness. I was a bit hesitant to read about another cursed family but I’m glad I sat down and took a chance, because I would have missed a gripping tale. Already, I’m eager to read about another piece of the puzzle getting solved by a different, yet very hot, alpha brother. World building is tough and challenging for any author, but Christina pulled it off better than most.

In this book, I met Jasha Wilder (not sure how to pronounce that, do you?) a very alpha male. A bit more than a successful businessman, he’s also a man cursed. I found it interesting that Christina chose not to call him a ‘werewolf’ and didn’t use any of the trappings you’d expect in most stories about humans turning into animals. Very refreshing. I enjoyed the family element Christina sought to give Jasha, the love and closeness he has with his brothers and sister, and the respect he has for his mother and father. Reading about the affection and caring he gives and receives in turn, provided an excellent background to establish why the horror they fight is so important, why the odds are seemingly against them and why they must persevere.

On the other hand, some things gratefully remain the same. Like the use of the canine nose and how it can smell arousal and desire. That gets put to wonderful use when we meet Ann Smith.

Ann starts off sounding a bit like how a lot of single women feel; lonely, alone, on the outside looking in and yearning for that emotional connection called love. She compensates by being the best she can be in her job, hoping Jasha will once day notice her. Oh, yeah, he notices her all right--and things won’t ever be the same again.

I accepted and found it believable that Ann considers herself a coward. It was good to read about a vulnerable and realistic person who didn’t know ninja moves, didn’t own the biggest, baddest gun in the county and didn’t wear black like armor. She didn’t freeze in panic, she used her head but the one tactic that backfired was her choice to run. She ran from Jasha. Anyone who has read werewolf romances knows you don’t run. You can imagine the passion and hotness that is coming next, can’t you? It’s wild, it’s fast paced and it is surprisingly controversial. I didn’t expect the extreme dominance enacted when he caught her. It was a forceful claiming and quite rough, to a point. Jasha exerted his dominance over Ann and even though she ended up enjoying it, it might raise some eyebrows as to how accepting she eventually became of her treatment.

That being said, I will defend Jasha’s actions and Christina’s decision to write it thus because this story is a paranormal. Jasha is being ridden by the very forces he and his family are fighting against. Yet nothing brings out the animal in any man like lust, the chase and the conquering. Paranormal stories allow me, the reader, to explore this titillating and perhaps secretly enjoyed aspect of our feminineness. And before someone gets hot under the collar with that sentence, Ann gets her own back. She fights when things get bad and I was extremely pleased with her defense of her cat, Kresley. In fact, it was a great touch and unexpected. I had no clue and I love surprises like that. And she certainly doesn’t let Jasha walk all over her. It may seem like it at times, but that's passive/aggressive defiance at it's best. I liked that, too.

This tale embodied elements of emotion that gripped me, teased me, had me laughing and turning the pages as fast as I could to find out what happens next. The dynamics between Jasha and Ann were a joy to watch as their relationship changed from professional to personal. The reason for their struggles gripped me and had me rooting for their success.

More than their future is on the line; so is the fate of someone Jasha loves very much and whom Ann is just beginning to. That touch, that hook, has me antsy with anticipation for the next book. Christina Dodd has created a wonderful and unique paranormal world to visit and for that, I’m grateful. Man, that sounds tame. I'm THRILLED!

Reviewed by Xeranthemum
Posted by Long and Short Reviews at 2:30 PM