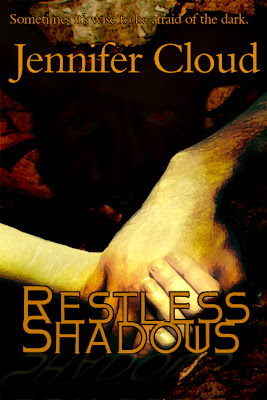 Anna Carswell, a woman haunted by past mistakes, met death during a suicide attempt and was left with a troubling gift: She can see where death will strike next. She and Nick are drawn together by their knowledge of things most people never see, but together they hope to regain normal lives.

Conducting research in Rome under the supervision of their college professor, another suitor follows in Anna's shadow, and their professor's interest in Anna isn't entirely professional either. He's determined to win her, even if it means murder.

Restless Shadows is about two people brought together by their personal struggles with death, personified as a being they call Shades. Anna, who struggles with the physical and mental scars of an attempted teen suicide, can see Shades at work. She’s scared of him, yet wants to understand him at the same time. Nick’s childhood encounter with Shades followed the abduction and murder of his older sister. He is still angry and seeks to fight Shades, to destroy it.

I found it an interesting premise. The hero and heroine’s causes seem compatible at first. Not only are they attracted to each other physically, but they find that they can understand each other. They see, in each other, a reflection of the things they feel separate them from society. And this says a lot about Anna and Nick as people. I thought it was a brilliant bit of characterization by Ms. Cloud.

Their desires to get closer to death lead them to an archaeological trip in Europe hosted by Professor Charles Archel. Charles, when compared to Anna and Nick, is not a complicated man. He’s a great big Freudian Id walking around, controlled by his indulgences and insecurities. I found Charles to be a little too stereotypical as a middle-aged alcoholic womanizer and these qualities were amplified after Shades planted a little seed of itself in Charles’ head. Shades’ subtlety forced Charles to act as the main antagonist and his fascination with Anna, his goal to possess her, and his sexual enjoyment of causing pain and death made him seem, to me, like a bull in a china cabinet.

Restless Shadows is not a light or cheery book, but it does occasionally show flashes of a dry, dark humor that keeps the reader from getting too mired down. The majority of the romance occurs in the first third of the book, and Anna and Nick’s relationship is pretty much established before the meat of the plot begins. But it is only after Nick and Anna fall in love that we get to see how their aforementioned causes collide, and that’s when things start to get really interesting. To stay together, Anna and Nick will have to examine themselves and learn to trust each other. Only when they do that, will they be able to face Shades and survive. Watching the two of them get to that end point is more than worth your time and money.

Restless Shadows will appeal to dark fantasy fans and people who like their horror psychological.

Review by Daisy
Posted by Long and Short Reviews at 3:11 PM