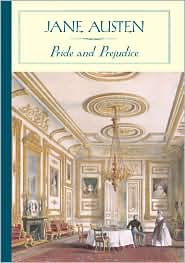 Pride and Prejudice
by Jane Austen

Pride and Prejudice is a story of love and life among English gentility during the Georgian era. Mr Bennet is an English gentleman living in Hartfordshire with his overbearing wife. The Bennets’ 5 daughters include the beautiful Jane, the clever Elizabeth, the bookish Mary, the immature Kitty and the wild Lydia. Unfortunately for the Bennets, if Mr. Bennet dies, their house will be inherited by a distant cousin whom they have never met, so the family's future happiness and security is dependant on the daughters making good marriages.

Life is uneventful until the arrival in the neighborhood of the rich gentleman Mr. Bingley, who rents a large house so he can spend the summer in the country. Mr. Bingley brings with him his sister and the dashing (and richer) but proud Mr. Darcy. Love is soon in the air for one of the Bennet sisters, while another may have jumped to a hasty prejudgment. For the Bennet sisters many trials and tribulations stand between them and their happiness, including class, gossip and scandal.

Here it is, folks: the grand-dame of all romance novels. If you haven’t read Jane Austen’s funny, charming story of the five Bennet daughters and how they find love, you need to pick it up, pronto. Yes, the language is Victorian and takes a little getting used to, but by the end of chapter one, you’ll find yourself engrossed in the story of beautiful Jane, strong-willed Elizabeth, and their three gossipy little sisters.

Mrs. Bennet is a silly, air-headed woman who is desperate to marry off her daughters, and the way in which poor, hen-pecked Mr. Bennet stands up to her is quite comedic. In fact, this novel is full of funny characters and moments. It’s also a great picture of 19th-century England, of the ways in which upper and lower class interacted (or didn’t) and the ways in which men and women were supposed to act during courtship. The slower romantic pace of this story is almost foreign to today’s reader, but there’s enough temptation and flirtation to make you keep turning the pages.

Pride and Prejudice is a beautiful story about the way in which two stubborn, independent people find love. Elizabeth cannot stand Darcy, early on: she finds him proud and obnoxious. But while Darcy finds Elizabeth both unpolished and “plain,” he is also stunned to find himself attracted to her quirky, honest, independent nature.

Class differences and family conflicts keep the two apart for most of the story, and you’ll find yourself anguished as rumor, jealousy, tall tales, and other love interests come between them. Only at the end of the novel, when Darcy selflessly and nobly saves the Bennet family name, does Elizabeth finally discover the truth about him. The novel’s ending is supremely satisfying, the classic happy ever after.

If you’ve seen any of the movie variations of this novel, you know it’s a powerful romance. Now give the book a chance – you might find yourself pleasantly surprised. I rarely hand out Best Book recommendations; in fact, this is my first. But Pride and Prejudice is worth it – every other romance novelist owes the popularity of the genre to Jane Austen, who started it all.

Review by Dandelion
Posted by Long and Short Reviews at 6:31 PM