Review: Not The Marrying Kind 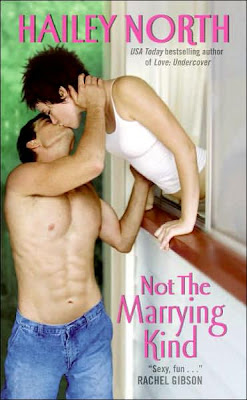 Not the Marrying Kind
by Hailey North

Sixteen years ago, world-famous artist Harriet P. Smith was the nerdiest girl at Doolittle High School, and Jake Porter was the new boy in town. Charismatic, handsome, and instantly popular, Jake was way out of her league. Harriet was shocked when he asked her to the graduation dance . . . and devastated when he left town for good the next morning.

Only his father's remarriage could bring Jake, now a hot shot L.A. music exec, back to small-town Arkansas. His only consolation is the stunning woman with the mysterious green eyes he meets at a local bar. He's got no idea he was a part of one of the best nights of her life—or that he's about to fall for her as hard as she once did for him. Jake's never been the marrying kind, but another night with Harriet might make him change his mind.

Author, Hailey North bursts back on the scene with a lively romance about an “ugly duckling nerd turned successful artist” and her second chance at love.

Once upon a time, sixteen years ago, Harriet P. Smith, nerd, went to the prom with handsome and worldly Jake Porter. She was the least popular girl in school, content to focus on her art and getting away from Doolittle, Arkansas as fast as high school was over. Jake, on the other hand, may have been the newcomer but everyone seemed to follow his lead from the onset. Jake took Harriet to the prom, danced with her till the wee hours, took her to heaven in his arms, and disappeared the next morning. Jake never knew he left Harriet with a lasting memory of their time together: his baby. Now they are both back in Doolittle for different reasons, and neither is happy about it. What will happen when Harriet’s secret is finally revealed to the music mogul?

A little bit of screwball comedy and an engaging love story make NOT THE MARRYING KIND a fresh and fun book from beginning to end. Author, Hailey North may have been absent for a time, but she is back in full force with this latest offering. Jake and Harriet are quite a pair; intelligent, independent, stubborn, prideful and made for each other. Jake is convinced he will never be trapped into a permanent relationship and yet falls head over heels for a mystery woman. Harriet, on the other hand, is trapped by the lies she has been living and hiding the truth from her son and the man who is his father. The passionate pair, when they finally come together, burn up the pages like a Roman candle. The secondary cast of characters is a lively mix, from Jake’s in-love father to their son, Zach, to many “old friends” from previous novels; Hailey North pens remarkably likeable characters across the board. The quirky sense of humor she is famous for is certain to garner Ms North many accolades. NOT THE MARRYING KIND is a “must read” book.

Review by Wisteria
Posted by Long and Short Reviews at 4:53 AM