Review: My Life With Apache 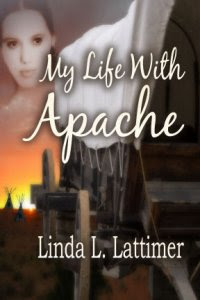 My Life With Apache
By: Linda L. Lattimer

He is Brave Coyote, but she knows him as Apache. On the way to pursue her father’s dreams of a new life, the wagon train she and her family are a part of is brutally attacked by Indians. The lone survivor, Elizabeth is surprised when other Indians arrive to offer assistance. With one bullet left in the gun, she recalls her father’s words to save it if necessary. Her father never wanted his daughters to suffer such a fate at anyone’s hands. Apache takes her to his home to be his wife but Elizabeth plans to flee. On the way to finding an escape Elizabeth learns much about the Indian people. And when she sees a side to her own people that wish to bring deliberate harm to the Indians, Elizabeth realizes the color of one’s skin makes no difference in a world seeking freedom. But is it too late for her and her Apache?

Have you ever wanted to read a story about surviving odds with nothing more than determination and guts with a little fate thrown in? Do you like reading about young people surpassing expectations? Do you appreciate reading about books that treat other cultures with respect, even the darker aspects? Are you a reader that needs an HEA that gives hope for the future of the hero and heroine beyond the immediate ending? Then this story is well worth considering.

My Life With Apache inspired me to write a review with recommendations that are different than most I write. As odd as it may sound, my advice for readers is: DO NOT READ THE INTRODUCTION UNTIL AFTER YOU’VE READ THE STORY. Why? Because it is full of spoilers! True, the author incorporates reasons which are sweet and noble for writing the story, but the spoilers will undermine the first and second chapters to the point you may find them unenjoyable. Also, I found some editing burps and odd bits in the beginning. The troubling part is this: most readers judge a book by those first two chapters and if their attention is not grabbed, which is possible here, they will be deprived of what turns out to be an engrossing and delightful read.

I don’t mind admitting that I was chatting online while starting to read this book. In the beginning, it was fairly easy to do. However, once I got into chapters three, four and five, I forgot I was chatting! I literally had to pull myself back to the present in order to respond to my online buddy. I gave up after awhile and just read. Fortunately, my IM buddy is very forgiving. *grin*

My Life With Apache is about Elizabeth and Apache a/k/a Brave Coyote. She’s fourteen and he’s twenty. Both, because of life circumstances, have been radically matured beyond what we’d expect from those same age groups today. I think Linda Lattimer researched her topics very well and I was shocked and intrigued to find out that some of the terminology used back then is in current fashion now. I wonder if other readers will catch them. Sure would be fun to dare you.

Elizabeth’s maturity grew before my eyes. In the beginning, her propensity to harp about going to Montana got irritating. But then I thought – hold on - she’s fourteen and was, up to that point, a teenager coddled and sheltered by her family. Her behavior fit and anyone can relate to it. As she observed and experienced life with the Apache people, the author brought me, along with Elizabeth, to the point of accepting that there are two sides to every story. Presenting the fact that newspapers and gossip mongers back then are the same as today; coloring people’s perception of reality - making worlds that are polar opposites even harder to reconcile. It definitely made Elizabeth’s view point and reactions believable and understandable. Older readers, as well as the target YA audience, will connect with her.

Apache/Brave Coyote is a young man of his culture. His strength and surety of what he wants and WHO he wants is never in question. His patience and the level of respect he gives Elizabeth endeared his character to me. I would be remiss if I did not mention a disciplinary action that may produce a wide-eyed moment for other readers, but I did not take offense, nor did it bump me from the story. Linda is writing about a different time and culture, and within that parameter, I accept Brave Coyote’s actions. He wouldn’t be the man whose people respected him if he was afraid to make difficult choices and carry them out.

I enjoyed watching the relationship and the love grow between Elizabeth and Brave Coyote. I was fascinated by some of the historical and cultural information that flowed seamlessly throughout the story. I was quite satisfied with the action scene that led up to the HEA; the loose ends and how certain issues were resolved. I absolutely adored the classic John Wayne style ending.

All in all, My Life With Apache is a wonderful story about a young woman in a difficult time in history, finding love in an equally unstable and dangerous world. Well worth reading, if you remember to save the introduction until after you’ve read the book.

Reviewed by Xeranthemum
Posted by Long and Short Reviews at 7:52 AM