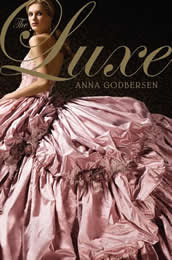 The Luxe
by Anna Godbersen

Beautiful sisters Elizabeth and Diana Holland rule Manhattan's social scene. Or so it appears. When the girls discover their status among New York City's elite is far from secure, suddenly everyone—from the backstabbing socialite Penelope Hayes, to the debonair bachelor Henry Schoonmaker, to the spiteful maid Lina Broud—threatens
Elizabeth's and Diana's golden future.

With the fate of the Hollands resting on her shoulders, Elizabeth must choose between family duty and true love. But when her carriage overturns near the East River, the girl whose glittering life lit up the city's gossip pages is swallowed by the rough current. As all of New York grieves, some begin to wonder whether life at the top proved too much for this ethereal beauty, or if, perhaps, someone wanted to see Manhattan's most celebrated daughter disappear...

In a world of luxury and deception, where appearance matters above everything and breaking the social code means running the risk of being ostracized forever, five teenagers lead dangerously scandalous lives. This thrilling trip to the age of innocence is anything but innocent.

Anna Godbersen's debut novel, The Luxe is issued as a YA novel. It's been years since I could be considered a young adult and I have to admit I found this glimpse into the turn of the 19th century teens fascinating. Think Gossip Girl meets the Gilded Age.

The Luxe is excellent. The characters are well-drawn and the problems facing them compelling and believable. The differences between the sisters lead to a climactic moment that, in retrospect, seem inevitable given their natures and outlook on life.

The peripheral characters as well add an element of richness to the story. The reader will want to slap the obligatory b****y friend and cheer for the lover from "the wrong side of the tracks."

I'm looking forward to next spring when the sequel comes out, simply because I was left with a feeling of "what will happen to ____" at the end of this book. I was sorry to reach the end and put it down.

I highly recommend this not only for young adults, but for those of us who are... ahem... young at heart.

Edited to add: Several of you who have entered have private blogger profiles with no email address included in your entry or on your profile. If I can't find you -- you can't win. I don't announce the winner anywhere -- I EMAIL you to notify you that you've won. So, if you don't have an email address where I can find it, you're not eligible for this prize. Thanks!
Posted by Long and Short Reviews at 7:01 PM