Review: Love Me, Love My Rafferty 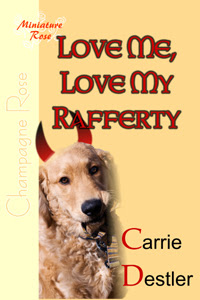 Love Me, Love My Rafferty
by Carrie Destler

Connor McIntosh wanted a pet. Something easy like a cat. Instead, he ends up with Rafferty, a mischievous, one-dog demolition squad who takes great delight in getting Connor into troublesome situations.

Lily, Connor’s new neighbor, takes the brunt of Rafferty’s shenanigans. A blueberry pie goes missing, screen doors get torn asunder, flower gardens get unsolicited makeovers. Together with Rafferty, Connor and Lily make their way through the dog days of summer and discover a method to Rafferty’s madness.

I'm a huge dog lover, which is why I selected this story for review. Rafferty doesn't disappoint. He's a lovable yet mischievous dog, with an owner who can't control him but loves him anyway.

Of course, it is thanks to Rafferty's mischief that Connor meets Lily, his new neighbor. It's not the most auspicious beginning, as she is knocked off her feet by the rambunctious dog, but she has a great sense of humor and doesn't hold a grudge.

To be honest, I was torn on rating this story. On the one hand, it was terribly sweet and the dog was adorable (though I admit to preferring my own, well-behaved pup). But, this story is told from Connor's point-of-view and his voice is not terribly masculine. I struggled with the fact that he said, did and thought things most men simply would not. There was also a lack of any real conflict since Lily falls in love with the dog immediately.

Still, this was a charming look into three lives, watching as they all fall in love with one another. You won't be disappointed with this lovely story.

Review by Poppy
Posted by Long and Short Reviews at 6:32 AM