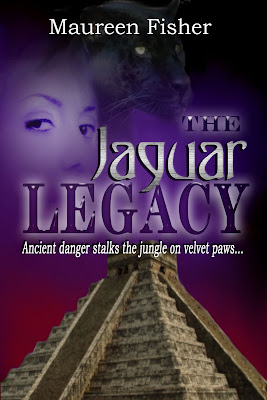 The Jaguar Legacy
by Maureen Fisher

Despite baffling panic attacks that devastated her career, journalist
Charley Underhill barges in on a Mexican archaeological dig, bent on
sniffing out a juicy exposé that will restore her reputation and earn enough money for her mother's life-saving treatment. Haunted by past betrayals, Dr. Alistair Kincaid isn't about to let a smart-mouthed reporter leak word of his latest discovery, an ancient Olmec city, to the press. A battle of wills and wits ensues. Strands from a past life intertwine with the present, drawing the couple into a vortex of chilling evil. Torn between redeeming her soul and betraying the man she loves, Charley faces impossible choices.

'The Jaguar Legacy' jumps right into a magic (and powerful) realm, and immediately, we learn of an otherworldly portent. Charley, the beautiful young woman summoned, is revealed; not as a high priestess or some sort of enchantress, as we expect, but as an exceptionally tenacious journalist. The sharp juxtaposition between the start and this main character is a surprise.

Ms. Fisher pulls off the contrasts beautifully. The very believable protagonist teamed with the author's complex, even graphic descriptions, bring us from the otherworldly to common-contemporary with ease and without obvious machinations.

The storyline is mostly unpredictable, and features exotic settings, and well-developed, interesting characters. Dialogue occasionally seems somewhat overly descriptive, and in places, reads slowly. The attitudes and antagonism between the main characters comes across very clearly, though. The author does have a very light touch with humor, and sprinkles in just the right amount throughout. At one point, after the main character's career is maligned, Charley says "I'll keep myself busy, you know, take photographs, snoop, pry and ask inappropriate questions."

This is a fun, lengthy and fantastical romance. The book jacket crafter deserves a gold star here, too, as the cover certainly does the story justice and is very appealing in its own right.

Review by Snapdragon
Posted by Long and Short Reviews at 6:36 PM