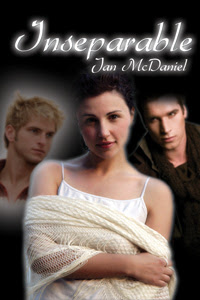 Devin has protected Zoe Broderick ever since she was orphaned as a toddler. Grown-up now, Zoe knows her imaginary friend should have disappeared long ago. Saddled with psychic powers, the dance hall owner wants a normal life free of premonitions and of her pretend pal.

When newspaper editor Max Wilder exiles himself to Zoe's small Texas hometown to overcome grief over his wife's death, fireworks ignite between him and Zoe on the Fourth of July. Zoe's attraction to Max throws Devin into a jealous fury.

Threatened by his sudden malice, she wonders what is Devin really? Were the tragedies that befell her past lovers sheer bad luck? Can she find a way to banish Devin, or has her interest in Max placed him in danger?

The characters in Inseparable are experts in tragedy. Zoe lost both parents to an accident, every man she ever loved has died, and her cousin Emery delights in making her life difficult. The hero of the piece, Max, is dealing with the death of his wife and some inappropriate feelings for her sister. Yet both of them find the courage to try for a relationship with each other.

Characterization is one of this book’s strengths, but the plot isn’t too shabby either. We don’t really find out who and what Devin is and what he’s up to until the very end. There were a few things that didn’t work for me, though. Zoe’s psychic powers were a little bit vague. Sometimes things she dreams come true, but there’s no way for her to know for sure that she dreamed the event until afterward. It frustrates her, because there’s nothing she can do about it. It would have been interesting had her powers been a little bit more defined and if there had been something about them that was different from every other lightly psychic heroine out there.

There was a point about twenty pages from the end where it felt like the story should have ended. There was more, but the attempt at a twist seemed a bit unnecessary and I wondered if the original draft fell short and needed extra words. The twist would have been better served had some subtle detail been worked in throughout the novel to make it logical as well as surprising. But, other than that, the ending was pretty satisfying.

Ms. McDaniel has a real gift for writing mutual attraction and sexual tension between her hero and heroine, and that was the element that kept the pages turning for me. She writes her love scenes without those awkward euphemisms, yet she refrained from the vulgarity that can yank a reader right out of the story.

Review by Daisy
Posted by Long and Short Reviews at 1:23 PM