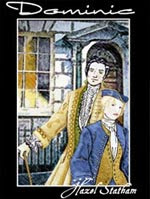 When Dominic returns from a night of revels to find a badly beaten youth on his doorstep, little does he know that she is to become in turn his pupil and his love.

Rusticated to his father’s estates, he again meets Sophie in her boyish guise and agrees to become her tutor – treating her as a boy. However, their idyll is short-lived when the duke arrives at Stovely and Sophie, transformed once more into a beautiful young woman, is forced to return to London.

Dominic, the Earl of Vale, has fallen on difficult times. His gambling and drinking have gotten out of hand and he has fallen out of favor with his father. One night, he encounters whom he presumes to be a young boy but in actuality is a fair maiden who has escaped from the mistreatment of her family. Dominic takes the girl (Sophie) under his wing as a pupil, but this requires that she must continue to appear as a boy who he named Jack. As the two learn more about each other, neither is able to properly express his or her feelings toward the other. This inability to communicate leads to misunderstandings that nearly result in dire consequences.

The character of Dominic was very well-developed. His thoughts and feelings are clearly described and it is therefore easy for the reader to understand his actions. I did not particularly like that he kept referring to Sophie as Jack throughout the book. I realize that he changed this practice after he admitted his feelings for her, but it just seemed odd that he would continue to refer to her as a boy. The detailed accounts of Sophie’s past were helpful in explaining why she was afraid of commitment and had difficulty trusting men. There were a few surprises in the plot but for the most part the storyline was predictable. Some of the words/phrases used in the book were unfamiliar to me but I was still able to follow what was happening.

This book contains elements of both love and betrayal. Being brought back in time to a simpler era was interesting. However, I was disappointed in the amount of romance that was presented in the story. More spice would have been an asset for those who were expecting a greater level of romance.

Review by Sweet Pea
Posted by Long and Short Reviews at 5:14 PM