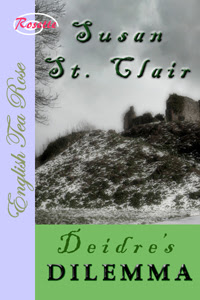 She traveled deep into the Scottish highlands as snow swirled around her carriage. Deidre understood the implications of her father’s wealth. Like so many others within her social sphere, her upcoming marriage had been arranged. It didn’t mean she would acquiescence to the marriage, especially after the unusual sight in the Duke’s courtyard. There must be an escape.

Diedre's Dilemma is a short historic romance. The characters are likable, but the storyline seems simple.

The exact time frame is not clear. The start is in a carriage and the mention of the trains, as well as the arranged marriage, all suggest nineteenth century, but there are few other clues. The strange husband-to-be, his peculiar home (and visiting animal!) but most especially, his business like manner, create empathy for the main character, Deidre. One expects something of a revolt by this young American girl who is being dragged along, all unwilling. Her decisions are very unexpected, though. She finds herself in a "topsy-turvy" world, but no less do we.

St. Clair did not create a strong sense of conflict, but this short romance does feature intriguing elements.

Review by Snapdragon
Posted by Long and Short Reviews at 11:45 AM