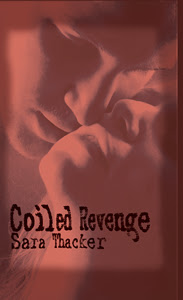 When young women start dying, lead detective Tony Santos is drawn into a web of deceit and revenge that forces him out of the police department and directly into the sights of the killer. His wife walked out, and he’s glad for that fact after a dead body winds up in his bed. Now he needs Marissa more than ever, but she’s got her defenses up and his charm isn’t working on her.

Marissa has never been physically strong, but threats to her personal safety force her to prepare for a fight. She hires a personal trainer to help her get in shape. But can Marissa get her emotions in shape and stop her overwhelming desire for Tony? He’s too close for comfort but her body begs to differ. She wants him but living in a small hotel room with Tony may prove to be more dangerous than the murders happening close to home.

COILED REVENGE by Sara Thacker is a spine-tingling suspense that is replete with dead bodies – bodies that bring chaos to Ton Santos and his estranged wife, Marrisa.

This romance is a page-turner that pulls the reader into a heartbreaking impasse between Tony and Marissa. While living apart, they both long for what they use to have before their daughter Ashley’s death and the arrival of notes that seemingly give proof of Tony’s infidelity.

As the body count climbs, Tony becomes a prime suspect and Marissa becomes a prime target for the killer. As the police department of Juniper, Texas, that Tony had been suspended from, and the FBI work to solve the murders, Tony and Marissa work on their own to find the killer’s motivation and why they seem to be at the core of the happenings.

The tangled web of deceit and revenge ensnares a wide array of character, many of whom seem to be likely suspects for the killings. The reader has clues about the killer as the story unfolds but not until the breathtaking, chilling climax comes is the truth really known.

If a reader enjoys suspense along with compelling romance, COILED REVENGE will give great satisfaction. Just be sure to lock the windows and doors if you're reading at night.

Review by Camellia
Posted by Long and Short Reviews at 6:56 AM