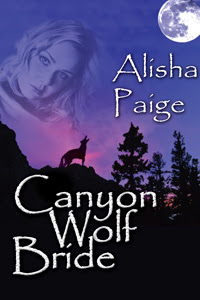 When Olympic ski champion, Sean Wilson, takes his best friend’s widow, museum curator, Paige Wellington, on a vacation to The Grand Canyon, he’s attracted to more than the beauty of his companion and the magnificent scenery. Sean discovers an entire pack of werewolves thriving in a canyon paradise. The Havasupai, known as the people of the blue-green waters, share his genetic defect, the werewolf gene. Paige learns the secret of the wolf tribe and struggles with her decision to end their relationship, unable to imagine herself married to a half-man, half-wolf creature and bear his fuzzy, carnivorous children. Sean wars against the beast within. Even as the werewolf, he is an intelligent and keen animal, never losing touch with the man lurking beneath the fur and never losing sight of the woman he loves. Will the wolf gene keep them together or tear them apart?
Also available in print!

This exceptional paranormal suspense-thriller features some edge-of-your seat (or perhaps more correctly, 'hair-raising" ) moments. Why is it when someone says, "Don't be afraid," you already know you are going to be terrified?

Paranormal and wolf trappings aside, "Canyon Wolf Bride" by Alisha Paige is an honestly good, intriguing and suspenseful story. The descriptions of wildlife and details of the forest are vividly real, and become a plausible backdrop for unpredictable occurrences.

The heroine, Paige, is a feisty, fun and obviously smart person, with a bit of sadness in her past. Her love interest, Sean, is obviously more than he seems, but he seems so wonderful, you want to love him. Sexual tension and sexual arousal build toward a very celebratory experience, although even while reveling in the moment, we realize that there is something hidden, something yet to come. And though we guess at all that is foreshadowed, the storyline is original and unpredictable. The natural world twines amazingly with the human world, and somehow, the world of the paranormal seems no less natural than an owl flying home by twilight.

This beautifully written book is a sensual delight, from beginning to end. Listen to the haunting background of Celtic song while the fire pops and crackles. Smell the cinnamon... admire that man with the very tight behind, the big, strong arm muscles, and his 'other side' as well. Canyon Wolf Bride is a contemporary paranormal romance, with hints of not just the other world, but of other times.

Review by Snapdragon
Posted by Long and Short Reviews at 6:53 AM