Review: Between the Gutter and the Sky 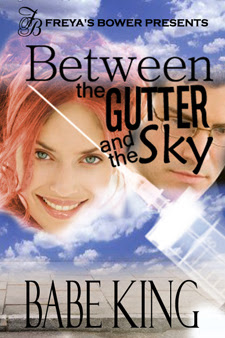 Between the Gutter and the Sky
by Babe King

Jacquelyn “Jac” Donnel, second-in-command doctor of the E.R, has vowed to do everything in her power to make the E.R more efficient and fast especially after the loss of her father due to inadequate care. And she won’t let anything or anyone stand in her way, especially Sam Allen and his teens. Jac believes that the gang rivalry and irresponsible teenage behaviour are taking up precious rooms and money from the E.R.

Sam Allen, has become a social worker to help and save the teens who are going down the same path that he did: joining gangs and causing trouble. But he did not expect to run into Dr. Jac at every turn. Sparks fly when Sam sets up his office in Jac’s hospital and starts to change the way things are run regarding treatment of teens. And on top of that, a lot of money is being shelled out into the teen intervention program, money which Jac believes can be used to better the E.R. Will these two who are extremely stubborn relent and get along before it is too late? How far will Sam go to help the teens?

This was a great book by Babe King. The characters were real, with real issues. Both Sam and Jac are equally stubborn. This created for a very interesting read.

The gang situation was very well described, portraying the need for love and the need for firmness when dealing with gang members and teens. The dialogue between the main characters are very snappy and quick, making it a very quick read. The one-liners between Jac and Sam had me laughing frequently.

The book climaxes with a scenario I have never considered before. I am not going to tell you what it was; you will have to read it to find out. But I guarantee that this will be a great read since it is filled with all the right amounts of what is needed for a fantastic story – suspense, romance and laughter!

Review by Jasmine
Posted by Long and Short Reviews at 6:56 PM