Review: Beauty and the Geek 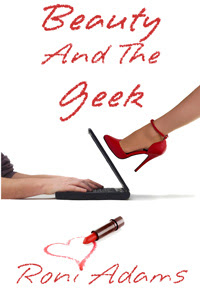 Beauty and the Geek
by Roni Adams

Becky Richardson’s motto is love ‘em and leave ‘em. The only man she trusts is her best friend Louie, the local computer shop owner and resident geek. When a mysterious man shows up at a masquerade ball and sweeps her off her feet, will she remember that men are good for only one thing or will she let down her guard and open her heart?

Louie Hanson has adored Becky since they were in junior high. He lives under no illusion that the former prom queen will ever see him as anything but her geeky friend. In disguise he arrives at the Valentine’s Day Ball and manages to take her breath away. Now he’s playing a dual role, knowing when she finds out it will be the end of any hope for a relationship with her and the friendship they once shared. How could he ever have thought this was a good idea? How can he stop fulfilling every one of his own fantasies by having Becky in his arms?

What can I say about Beauty and the Geek? It's probably the best romance novel I've read in a long time. Instead of the alpha male trying to get a virgin into bed, Beauty and the Geek has an experienced woman driving a sweet guy crazy. I usually love the friends become lovers storyline and this one does not disappoint. The character development was beyond my expectations. As I read the story, I felt like I was getting to know them. They were so real to me.

I completely bought the friendship between Becky and Louie. At first, I wondered at how clueless Becky was that she would flirt so mercilessly with a guy who was obviously in love with her. But as I saw their relationship grow, it didn't seem out of character at all. Becky isn't really clueless, just in denial. She isn't just a typical maneater either. She has depth to her. She loves Louie as a friend and her friendships mean everything to her.

Louie. Louie. I loved this guy. He really isn't geek. He's an intelligent man, madly in love with a girl who's never given him a second glance. He's not all bits and bytes. He's a passionate guy, just waiting for a chance to show it. I wanted to smack Becky to get her to see it.

The writing is superb with twists that drive the plot and a few surprises. It's a story with heart. I teared up a few times. I was miserable when they were miserable. It's also HOT. The sexual tension between the characters was perfect. My only complaint was a mix up in eye colour a few times. It's going to be hard to review anything after this. What can match up to it? I'm hard to impress but the only rating I can give it is:

Review by Lavender
Posted by Long and Short Reviews at 3:48 PM