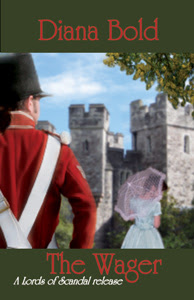 The Wager [Lords of Scandal Book 1]
By Diana Bold

Captain Dylan Blake has spent the last decade fighting for his country. Desperate for a little peace, he sells his commission and returns to England, but soon finds himself angry and adrift in London society, searching for something to fill his empty days. When an old nemesis challenges Dylan to a wager - he must get Lady Natalia Sinclair to dance with him twice in one evening - he is willing to play along.

Lady Natalia Sinclair fears her enormous dowry is the only thing that draws her many suitors. But heroic Captain Dylan Blake seems different. Unfortunately, she soon realizes his smile is false, his interest superficial.

Dylan sees Natalia’s rejection as a challenge and the stakes increase when he discovers his father has ordered his older brother, Michael, to win Natalia’s hand. Passed over for Michael far too many times, Dylan needs to prove he can be first in someone’s heart.

As the lines between the wager and attraction blur, can Dylan and Natalia find the courage to take the biggest gamble of all - love?

First in the Lords of Scandal series, The Wager is a lively cat-and-mouse story with two memorable protagonists.

Freshly returned from the war, Captain Dylan Blake is at loose ends. London holds no excitement for him until a wager sets him on a course with the heiress, Natalia Sinclair. Hated by his father, passed over throughout his upbringing, he is in dire straights. What begins as a foolish bet soon becomes a desire to make the lovely woman his bride. What happens in between is an intensely entertaining story of mistaken intentions and intense desire.

Natalia has been pursued by fortune hunters to the point that she trusts no man. When Captain Blake seems to take an interest in her she is powerless to resist, until she discovers the wager involved. Though she sees the wounded man behind the social mask, she is determined to resist, but her resistance may be short lived once he sets out to claim her for his own. Knowing full well that a second son will not satisfy her father’s requirement for a son-in-law, Natalia is nonetheless intrigued by Blake.

A charming romp with two delightful characters, The Wager puts a fresh and original twist on the “wager” storyline. Natalia is an intelligent heroine who is not about to be “hustled” by a handsome man. She leads our hero on a merry chase before he catches her; she is determined to have all of him, his unconditional love. Dylan Blake is a charming rogue with an ingrained need to best his brother after being passed over many times by his father. His quest to win Natalia becomes an admirable one; his interest in her realistically presented as well as the conflicting emotions he feels. Natalia’s feelings for Blake are abundantly clear, culminating in a sensual encounter that cements him in her heart and her in his. Though he is afraid of what seems too good to be true, he may have found the one woman who can save him. For fans of historical romance, you can’t go wrong with a Diana Bold book, and The Wager is a feather in the author’s cap.

Reviewed by Wisteria
Posted by Long and Short Reviews at 6:54 PM