Review: Under The Spell: Book 5 of the Incognito Series 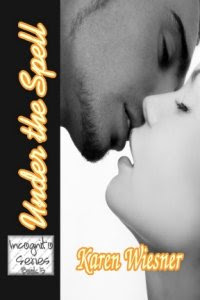 Under The Spell: Book 5 of the Incognito Series
By Karen Wiesner

Alex Lynch has spent a lifetime working hard toward the goal of owning the Triple Aces Ranch in Fever, Texas. His dream has finally come true when Gina Calhoun—a girl he’d loved all his life, despite her penchant for looking for trouble and his penchant for bailing her out—drops back into his life, seemingly out of nowhere.

Network Communications and Systems Analyst Justine Fielding, the former Gina Calhoun, is all grown up, more beautiful than ever...and even more restless.

Little does Alex know that the woman he’s falling under the spell of all over again is there on a mission to uncover and stop the dangerous men who killed her father—Alex being her chief suspect. This time, Gina may be the only one who can bail him out of the trouble about to come down on him.

If you’ve been following Karen Wiesner’s Incognito series, you are now well versed in its baseline motto; once you join The Network, whoever or whatever you are is dead – to yourself and anyone you will leave behind. There is no going back – ever.

Ms. Wiesner, the queen of the ‘what if?’ scenario, once again plays with the rules of her world by having one of her characters, Justine, get offered the unthinkable – a chance to go back to being the person she once was.

Whether or not the author intended this as a real life lesson, this story shares a warning to youthful readers who, as young adults, might be chomping at the bit of life and are resentful of the restraints they believe they are under. Perhaps they’ve even been bombarded with the advice all generations seems to be a recipient of: Don’t rush into things; you have your whole life ahead of you; Tomorrow is another day, You’re too young to know all there is about life.

Gina Calhoun made that classic move; she joined The Network to escape the stifling thumb of her father and the spurned love of her life because she was convinced things would never ever get better. She was doomed to stay in the rut that was her life. She knew what was what and made her choice. Oh, the wisdom of youth.

Justine a/k/a Gina Calhoun, is now a women who must go back home to face more than just the investigation into traitorous activities. (Get ready for some surprise twists in solving this case folks, it’s a doozy!) She has to face the fact that what she believed about her father and his intentions at the time might have actually been colored and distorted by her youthful passions. In the process of facing the past she also has to face her preconceived notions about the man she loved and left behind, Alex Lynch.

I enjoyed Alex. He was a man’s man even in his youth. His traits of honesty and loyalty are laudable. However, his stalwart belief in Justine/Gina’s father made him, in her eyes, weak, uncompromising and obsessive. Justine viewed his words of young love as questionable and insincere when he would not do as she wished back when she was ‘Gina’. I found it interesting that for the most part, Alex remained the same and those traits now made more sense to Justine. Alex wasn’t uncompromising, he just saw things more clearly. He wasn’t weak, he wanted it all too, but understood her dad’s position. To a point, I could see how Gina/Justine thought he was obsessive about the ranch, but I didn’t get the feeling he ever used her to get it.

I enjoyed reading about her growth in understanding, yet I felt her pain. She can’t go back, she can’t have what she threw away – a love so special and real you want to rail at the unfairness of it all in her behalf. Yes, Alex and Justine/Gina love each other. There is passion and yearning and so many moments where you feel that theirs was a love that could have taken them onto their Golden Years. Yet Justine belongs to The Network. Oh, what to do?

After reading this review you might be wondering many things. Who really is the bad guy in this story? Why didn’t I talk more about the suspense and action? Mostly because I really fell for the romance of Justine and Alex and that made a bigger impact on me. As for the future of their relationship you might ask, “Can there be a compromise? What does the author come up with this time that satisfies the romantic in all of us? Can Justine possibly hoodwink The Network?” I can tell you that what ends up happening makes me believe in the impossible.

Another thing I can say, Karen Wiesner has me Under the Spell, and loving it!!

Reveiwed by Xeranthemum
Posted by Long and Short Reviews at 12:47 PM