Review: The Songbird of Rushen Abbey 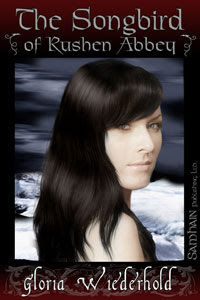 The Songbird of Rushen Abbey
By Gloria Wiederhold

Torn between two powerful lords, pulled toward one infallible destiny…

On the hauntingly beautiful Isle of Mann, legends say that King Alban will cross paths with a maiden gifted in song who will one day be his queen. Alban finds that maiden in Estelle Percy, a young woman known as the “Songbird of Rushen Abbey” and reputedly the descendant of royalty. However, Alban isn’t alone in his quest to claim the Songbird. Lord William Percy has set his sights on Estelle, too.

As these two powerful men vie for Estelle’s heart, their lives become intertwined in a web of love, desire and deceit in this sweeping, romantic adventure.

The Songbird of Rushen Abbey is enjoyable but the experience of reading it is not exactly smooth. Estelle Percy is the songbird of Rushen Abbey. She has a beautiful voice and is the daughter of Emmanuelle, the king’s mistress. Her mother was sentenced to live the abbey after her disobedience and died giving birth to Estelle there. Estelle grows up in the abbey and one day, she meets with Alban, the handsome king of Ellan Vannin. Both fall madly in love, but the king has a national duty to fulfill and cannot marry her. Other arrangements are made and Estelle finds herself in the hands of another lord. As it happens, this lord is in love with her too.

I felt the story was told a little haphazardly. As I read the novel, I could not help but feel like I was driving along a bumpy road. I kept getting abrupt jolts as the story jumped from one part to another. I wanted to feel for Estelle but I found it difficult.

The Songbird of Rushen Abbey has great potential for a wonderful story, but somewhere along the line, the plot gets a little tired. It is a tragic love story, full of passion and hardship. However, the characters need more nurturing. The story is written in an easy-to-read style but a little challenging to connect with meaningfully.

Reviewed by Tulip
Posted by Long and Short Reviews at 7:47 PM