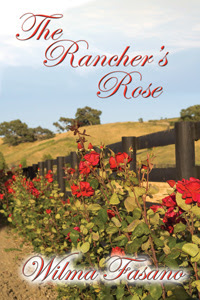 The Rancher’s Rose
by Wilma Fasano

Rosemary Robbins kidnaps her sister’s child, Trevor, to protect the baby from being sold on the black market. She takes him to his father’s ranch in Western Alberta. Jordan Sterling, Trevor’s father, at first denies the child is his, and suspects Rosemary of questionable motives. In the interests of providing a good home for Trevor if Rosemary is discovered, Jordan, on the advice of his lawyer, suggests a platonic marriage of convenience. Rosemary agrees, reluctantly, for Trevor’s sake. Neither want platonic, but both are too stubborn to admit this. Which one will capitulate first and say, “I love you”?

What would you do to save a child from the most dastardly of schemes? That is the question Rosemary has to ask herself when she discovers her sister and brother-in-law’s diabolical plans.

Rosemary Robbins has taken care of her sister’s little boy since he was born. Never has there been a word of thanks or a contribution to expenses from her self-centered sister, Blair. Since her divorce from rancher, Jordan Sterling, there has been a steady stream of “uncles” through the child’s life with a new husband as the last and vilest of men in little Trevor’s life. When Rosemary discovers the couple’s plans to sell the child on the black market for $200,000.00, she takes him and runs, right to the baby’s father, Jordan Sterling, who has no idea he has a son.

Since his divorce from Blair, Jordan has become a recluse. Once a driving force in the ranching community of Western Alberta, Jordan has now become quite cut off from his former interests. When Jordan discovers Rosemary and a baby stranded in a snowstorm, he takes them back to the ranch. When told who the child is, Jordan is skeptical to say the least; Blair told him she was sterile. Contracting a marriage of convenience to protect the child, the couple determines to fight to the death to save this innocent child from harm, and along the way love just might creep into the mix.

The Rancher’s Rose is an emotional and well written love story of two admirable people who fight to save the life of an innocent child. The characters and situations are realistic, the drama well portrayed, and the love story poignant. Jordan and Rosemary are brave and intelligent individuals who are not afraid to fight for what they believe. Their devotion to each other and to the child is well presented; emotional and heartfelt at all times. The chemistry between Jordan and Rosemary is a living, breathing force that sizzles and pops whenever they share a scene. The portrayal of Blair and her husband is perfect in this reader’s opinion; evil at is most vile. A grand way to spend an afternoon, you cannot go wrong if you choose The Rancher’s Rose by Wilma Fasano. It is well worth the time and money invested.

Review by Wisteria
Posted by Long and Short Reviews at 10:13 AM