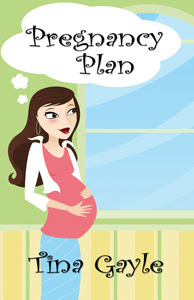 Pregnant shopkeeper Jillian Wilson prepares for single parenthood until high-risk security specialist Derrick Harris, the baby’s father, is caught in an explosion that changes everything. Confused, Derrick returns to the States with amnesia. Jillian believes she has it all--a husband, a baby, a perfect life, to bad that her dreams hang on Derrick’s faulty memory and a lie.

A quirky sort of page turner, The Pregnancy Plan will delight readers looking for something a little different. Follow along as Jillian and Derrick stumble their way toward a life-long love.

Former shopkeeper, Jillian Wilson has a plan to have a child: The Pregnancy Plan. She hasn’t met anyone she actually wants to have a baby with to date, so she is going to go through having a child as a single parent. Through a mixed up message on the answering machine, Derrick Harris rushes to Jillian’s motel room to stop her from messing around with his brother, Jason, who happens to be engaged.

When Derrick confronts Jillian, his former lover, he discovers it was all a misunderstanding, which sets in motion a weekend of reunited bliss between Jillian and Derrick. Derrick agrees to father a child even though his high risk job in the Middle East put him in the danger zone. Before leaving for his latest assignment he gives Jillian an engagement ring with the promise that they will marry if she is pregnant. When an accident occurs that injures Derrick, Jillian rushes to his side in Germany as his “wife” and so a charade begins until Derrick’s memory returns. What happens to the happy couple then?

Tina Gayle brought the story to life on the pages. Jillian and Derrick both wormed their way into this reader’s heart with their emotional connection, sexual chemistry and genuine love for family. The storyline is a fresh and fun one, emotional in places and laugh out loud funny in others. With a flair for characterization, Tina Gayle allowed this reader to “see” inside the minds of these two personable individuals and believe they would make wonderful parents. The devotion each shows for home and family is an admirable one. The Pregnancy Plan is a great story to spend the day with, and easy to recommend.

Review by Wisteria
Posted by Long and Short Reviews at 4:23 PM