Review: Over the Wall 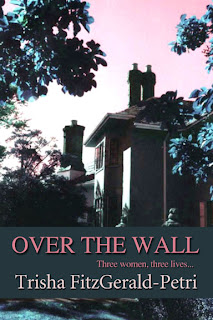 Over The Wall
by Trisha FitzGerald-Petri

Growing up and growing old. These two side effects of life creep up on Finnula ‘Fudge’ Ginnane and her mother, Mary, simultaneously, yet while the pubescent country girl is helped through this confusing time by her best friend, Lilly McDermott , the older woman must face advancing age and the heartache of a secret relationship alone.

First things first: Over the Wall is not a romance. While a small part of this novel does explore the development of romantic relationships between its main characters, to expect it to follow the formula of a contemporary romance would be hugely misleading. Rather, this novel should more properly be categorized as women’s fiction, or general literary fiction.

Over the Wall tells the coming-of-age story of Finnula “Fudge” Ginnane and covers nearly twenty years, from Fudge’s boarding school experiences as a young girl to her years in secretarial school, her first job, and her first love. Fudge is a wonderful character, inexperienced when it comes to life and men, but always wanting to help others, often putting everyone’s else’s happiness before her own. Readers will both sympathize and identify with her, and I was hard-pressed to put this book down as I became more and more involved in her life.

Fudge’s best friend, Lilly McDermott, is a precocious but lovable young woman who is everything Fudge is not: voluptuous, outgoing, experienced with men, but also lost without her mother, who died when Lilly was a girl. The friendship of these two young women, which lasts from their early boarding school days to college, through first jobs, first loves, and beyond, is touching and well developed.

Lilly’s older brother, Julian, and father, Michael, also play important roles in this novel, crossing paths with Fudge and her family several times. The author does a nice job making their actions believable and, at times, quite heart-breaking.

While the central focus of this novel is the friendship of Fudge and Lilly, and the way in which each woman searches for love, the author also takes the time to explore a non-traditional romantic attraction between two middle-aged characters, one married and one widowed. I found FitzGerald-Petri’s dealing of their attraction, and the consequences that develop from it, well done.

There are some very funny parts in this novel as well, and some great minor characters. Since it is set primarily in Ireland, readers will get a terrific sense of location and local culture from reading it. At times, however, the narration and setting descriptions felt a bit heavy and drawn out; this would be my only criticism of the work.

While I found the ending to Over the Wall satisfying and believable, some readers may not, because this author doesn’t shy away from reminding us that tragedy is present around us, all the time. Again, if you’re looking for a traditional romance, Over the Wall is not the book to pick. However, I thoroughly enjoyed this story and found it a compelling study of female friendship, romantic entanglements that creep in when you least expect them, and the ways in which people deal with the ups and downs of life.

Reviewed by: Dandelion
Posted by Long and Short Reviews at 7:17 PM