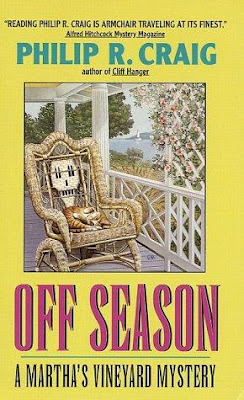 Off Season
By Philip R. Craig

Food connoisseur and amateur sleuth J.W. Johnson and his fiancee expect a peaceful winter on Martha's Vineyard, until tempers flare between local hunters and animal-rights activists.

Philip R. Craig's J.W. Jackson has become an icon in the mystery world. Craig's Martha Vineyard's Mysteries are like the best kind of armchair travel - the reader is transported to the very different world of New England Island life. And what would J.W. be without his bride-to-be, Zee Madieras?

While I might characterize Craig's series as mysteries, I end up coming back to them for the developing romance. And since Craig managed to complete eighteen JW books before tragically dying of cancer last May, those of us who love JW and Zee have plenty of good times to carry us through our addictions.

JW's laconic narrative style is a true pleasure, and the way he speaks about Zee is enough to stir any woman's blood. He is truly gallant and clearly head-over-heels in love. While his ways of expressing that love might be unusual - buying and fixing up a wood stove so that they'll both be cozier in the evenings, or deciding that his “refrigerator soup” and cornbread supper for Zee will be “fit for a queen,” he's so endearing that it's hard not to fall in love with him.

Off Season is a delight, in part, because it takes place during those times of year when Martha's Vineyard is left to the natives, and all of its fierce, winter beauty is revealed. This gives JW license to create new recipes for us all (a feature of all the Martha's Vineyard Mysteries) using the bounty of the fall and winter seasons. Additionally, we get to see how Christmas is celebrated on the Island.
The mystery itself concerns the murder of one of the Island's rather oddball characters - a pudgy, hermit-like Chug Lowell, who turns out to have a very busy double life. Various members of the Island's aristocracy are drawn in, and it makes for a fine mix of parody and tales of small town life.

The real reason to come back, however, is JW. And Zee. And the love they share and the lives they are trying to blend while settling into their recent betrothal. These are not young lovers on first flush - Zee is twenty-nine and JW is fully forty-two or so, and blending their very independent lives, along with their jealousies of former lovers who remain on the Island, makes for a big turning point in their relationship.

Now that the seasons are changing, if you want a great evening by the fire, dreaming of oysters, Sam Adams beer and the perfect, mature romance, Off Season is just the ticket.

Review by Sunflower
Posted by Long and Short Reviews at 4:31 PM