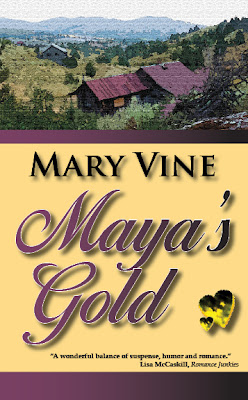 All famous mystery author Stanton Black wanted was to leave the flashbulbs of Hollywood behind. Hiding out in the wilds of northeast Oregon seemed like the perfect way to get over the attempt on his life while researching his work. His latest novel would draw on the history of his ancestors and the lore of gold country. Now, all he needed was a suitable tour guide.

Special education teacher Maya Valentine was no tour guide. After the death of her parents, Maya has come home to Salisbury Junction for the summer only to have an ailing friend talk her into escorting Stanton around the area. As a pattern of crime around her and the newfound gold on her property leads to a real-life mystery, her relationship with Stanton turns to thoughts of romance. A romance too impossible to consider.

Maya Valentine inherits her family’s summer home, situated in gold country, upon the early and unexpected death of her cardiologist father. Being a school teacher for special education students, she decides to spend her summer in Oregon at the house to grieve over her father’s untimely death and to make decisions regarding her own future and that of the house. Stanton Black, the famous and celebrated author has taken up residence in a nearby home to research his next book. But he has his own demons to fight. Trying to get over a recent attempt on his life, he is battling nightmares and visions of gunmen daily in his dreams.

Stanton Black hires history enthusiast Alice Roberts to show him the historically significant sites in this region. But through a series of events, Maya Valentine is given the “honor” of escorting Mr. Famous around. At first they clash and lock horns. Stanton is suspicious of Maya, thinking that she is a reporter trying to get an inside scoop. And Maya thinks that he is stuck up and arrogant. On top of this, adding suspense to this story is the fact that somebody wants Maya to sell the place so that they can get their hands on the supposed “gold” on her property. At first she suspects Stanton, because he was interested in buying her place. However, as both get to know each other they realize that their preconceived notions were not right and that the other person could be trusted. But could that trust turn into love? What about Stanton’s fiancée, the famous Michelle Karr? And will they decide to share that love with each other before it’s too late?

I really enjoyed this story! I could not put it down. The story has a believable story line and the characters are described very well. Maya’s hesitance in starting a relationship with an engaged man and Stanton’s trust issues are clearly portrayed; it is not written, but it is shown through the actions of the main characters. The suspense/mystery twist added to the story made it very exciting to read. Even though the readers are introduced to the villain early on, it does not detract from the story. The principals in the book are strong as well. Even though both Maya and Stanton are attracted to each other, Maya always draws the line before anything untoward happens, because she knows that he is engaged. And Stanton always respects that. That is one aspect that I really liked about this novel and hence makes this story extremely sweet.

Furthermore, I enjoyed the portrayal of Maya’s character very much. Even though dangerous and bad things happened to her, she does not let herself get down. And when nobody listened to her suspicions regarding the person who was trying to force her hand to sell her place, she takes matters into her own hands and decides to investigate. This lands her in some pretty serious situations, but that is part of the fun of reading this novel!

I would recommend this full-length novel to anyone. But be prepared to not get some things done, because once you start this story, you will not want to stop until the end!

Reviewed by Jasmine
Posted by Long and Short Reviews at 2:08 PM