Review: Love in the Afternoon 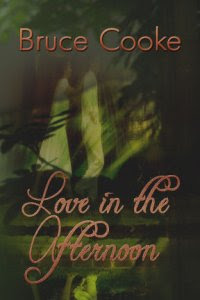 Love in the Afternoon by Bruce Cook

Fighting depression, loneliness and self-loathing after her abusive womanizing husband dies, fifty-year old Joanne Montgomery meets fifty-three year old Richard Collins who re-ignites her life. They fall in love but Joanne’s daughter, Becky, who thought of her father as a saint is aghast that Joanne would even consider dating another man, especially a larrikin like Ritchie. Just as they overcome the resentment, Ritchie’s gold digging ex-wife arrives on the scene after being thrown out by her lover. She wants back into Ritchie’s life and will go to any lengths to split them up. When she convinces Joanne that she is back sleeping with Ritchie, Joanne’s world comes to an end, as she feels betrayed once again. But Ritchie won’t let a lie destroy the happiness he has found and fights to get Joanne back.

This is the first romance I’ve ever read written by a man, and I have to say it was a wonderful experience.

This story revolves around two people who find each other late in life. Joanne is newly widowed and whose poor quality of marriage she kept a secret from her kids.

Ritchie is a man who raised his kids and his company practically single-handedly and felt he would never find a woman he wanted to spend the rest of his life with until he met Joanne.

Right from the get go I was laughing; when Joanne meets one of her husbands floozies at the funeral and has a conversation with her, I found myself applauding Joanne’s tact and fire. It didn’t take too long for Joanne’s character to jump out at me in full color. I loved her wit, her rapier mind, her strength and her style. I would adore meeting a character like Joanne in real life. She’s a class act.

Ritchie, for me anyway, was a beta hero. He was strong but not overt. He was focused but not overwhelming. He was romantic and quite persuasive without being abrasive and pushy. He probably was very alpha in the financial world hence his successful company, but we don’t see him transfer that into his personal life. He’s very “there” for Joanne. And I get the impression that he was extremely hands on with his kids.

Speaking of kids; Ritchie’s daughter Sally is a hot ticket. Her antithesis is Joanne’s daughter Becky. If you think of Snow White, Becky was like ‘Grumpy’ to Sally’s ‘Happy’. The byplay between the two of them as they reacted to their parents' developing relationship was fun to read.

Of course, no romance is complete without the proverbial bump in the road and that comes courtesy of Ritchie’s ex-wife. What a diabolically pathetic creature!

As a reader, I appreciate Mr. Cook's deft handling of cultural references. This story takes place in Australia and of course there's going to be some headscratching from people like me on the other side of the ocean due to some of the terms. The words he did use were just enough for exotic flavor but not enough to throw a reader from the story. I enjoyed the feeling that People Are People, no matter where they are.

I'd be remiss not to share my amusement with Ritchie's propensity to nibble a certain part of Joanne's body. It was So ... "guy". Now I'm wondering if guys like to do that as much or more than gals like having it done. I couldn't help but read with a smile on my face.

As I’m writing this, I had a realization. I just figured out that even though Joanne and Ritchie come from opposite sides of the city, each in their own way dealt with a personal problem in the exact same manner. Only the degrees in which they were able to address it were different, but their approach was the same. The characters didn’t catch it but I did. What fun!

If you enjoy romance stories about second chances at love, Love in the Afternoon does that and more. It’s sweet, endearing, uplifting and life affirming. If you are in the mood for a feel good romance, again, this fits the bill. As we all know, love can happen at anytime, not just in the afternoon. So read this anytime. You’ll be glad you did.

Reviewed by: Xeranthemum
Posted by Long and Short Reviews at 6:44 AM