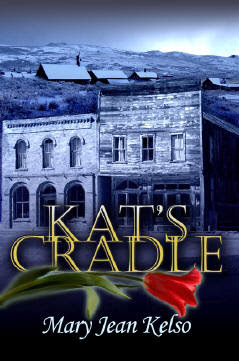 Katrina (Kat) Sturdivant’s young life has been a struggle to survive under harsh conditions in a dangerous mining town during the “Bad Man of Bodie” days. She has lost her mother and baby brother and, now, her father has been killed. She is convinced his death was not an accident and sets out to find his killer. Kat, the pursuer, soon becomes the pursued.

Kat’s Cradle was a departure from my usual genre that I like to read. I’ve read a few historicals in my time but they’ve always happened “across the pond”. This story was refreshing in that it took place in the United States during the time when Mark Twain was still writing newspaper articles.

The first chapter introduced me to Katrina and her best friend Polly. At first, the girls are like any fifteen year-olds of their time, yet as the story unfolds a shift is brought about by the harsh realities at that point in history. When the tragedy that was foretold to Kat comes true, I had my heart-strings pulled when I realized just how alone Kat was in the world at that moment. Not just in her living arrangements but in her beliefs, her adamant stance that something worse happened and no one will help her solve it. It was hard to read about a young girl being ignored yet at that time she was also considered a young woman with responsibilities far beyond what today’s fifteen or even seventeen year-olds are expected to do.

Kat’s absolute conviction that a serious wrong was done to her and her family and her decision to not rest until justice is done seems a bit more mature than I’d expect of a fifteen year-old girl. Yet, when the author puts Polly and Kat in the same scene again, it was made achingly clear that life’s hard lessons mature even the youngest person, sometimes far beyond their years. In our day and time, we’d call them “street smart”. I’m not sure what or how they were referred to back then, but Katrina got life smart.

This isn’t a romance but a mystery. Kat ends up having adventures in her haphazard quest for the truth and pursuit of justice. The only romantic element involves Sam, Polly’s brother. He is a couple of years older and believe it or not, I found Sam providing most of the romance to the story. Quite a switch.

I would be remiss not to mention a few head hops that jarred me a bit from the story, but overall didn’t distract me from wanting to know how in the world a young miss from a land locked mountainous town expected to travel to Alaska by herself to accomplish her goals.

I will not judge historical content - that is for the historical buffs to discover and enjoy. I base my three book rating on the emotions I experienced while reading about Kat’s trials and tribulations as she solved the mystery. And if you are wondering, there is definitely an HEA. I also want to say that it too follows in historical accuracy but I can’t be sure. One thing I DO know, it that it was sweet.

Kat’s Cradle covers most points of a good story, you care for the main character, you want her to succeed, the mystery gets solved and there’s a happily ever after. For a novella, what more can you ask?

Reviewed by: Xeranthemum
Posted by Long and Short Reviews at 7:32 PM