Review: Jewels of the Sun (Book 1 of the Irish Trilogy) 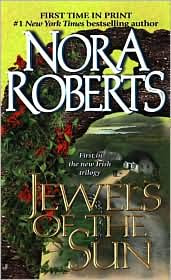 Jewels of the Sun
by Nora Roberts

In the small village of Ardmore, Ireland, Gallagher's pub is the center of the lively seaside community and the home of three passionate siblings: Aidan, Shawn, and Darcy. As a world traveler and a barkeep, the eldest brother Aidan has just about seen and heard it all, but when a quiet professor from Chicago enters his tavern, he is instantly intrigued--and certain that there is more to Jude Murray than what meets the eye.

Jude has returned to her grandmother's ancestral home to sort out her thoughts, know her heart, and "find Jude F. Murray in six months or less." After a life of deliberate security, Jude finds herself recovering from a failed marriage and a disappointing career. With the pretense of a research expedition, Jude leaves her life in Chicago and moves into the charming house on top of the faerie hill. Surrounded by the awesome scenery and relieved by the simplicity of life, Jude excuses her visions of ghosts and faeries as signs of her mental recovery.

But the inhabitants of Ardmore, and Aidan Gallagher in particular, don't dismiss these apparitions with such convenient logic, and Jude learns to listen more carefully to the messages in the world. As Aidan and Jude draw closer to each other, Jude struggles to discover, balance, and define the complex parts of her soul.

How can you not love a book that begins with this line:

Obviously, without question, she'd lost her mind. Being a psychologist, she ought to know.

Nora Roberts, without a doubt, outdid herself with this book. It is one of my favorites of hers, one that I return to time and again. Jude Murray is an American trying to find herself in six months or less and she believes Ireland might just be the place to do it.

I was charmed right along with Jude at the picturesque town of Ardmore and its amazing inhabitants. After reading this novel, I truly believe that I could find this place on a trip to Ireland, it was so incredibly real and well-drawn.

Watching Jude as she slowly came out of her shell, finally began to find out who she was outside the expectations of her family and friends from Chicago, was a joy. As she embraces the way of life in Ireland, taking it bite by bite until she indulges in a crazy love affair -- not just with Aidan, but with the entire country.

Yes, this book had many of Ms. Roberts' well known POV shifts, but she is one of the few who handles that taboo smoothly, without jolting me out of the story. If you're looking for a solid romance with a touch of the paranormal, I highly recommend this book.

Review by Poppy
Posted by Long and Short Reviews at 5:28 PM