Review: Hundreds of Years to Reform a Rake 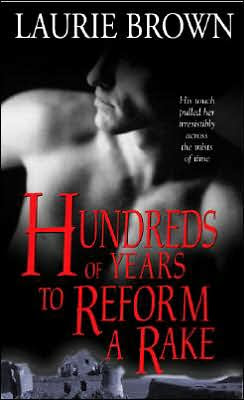 Hundreds of Years to Reform a Rake

Josephine Drummond is a professional paranormal researcher (aka, a ghostbuster) hired to prove that the ghost of Lord Deverell Thornton, the very handsome Earl and a notorious rake in his time, haunts the crumbling Waite Castle. But the ghost drags Josephine back to the Regency period to help him try to prevent the swindle that impoverished the Earl and threatens to turn his castle into a most undignified
modern-day tourist attraction.

Josephine has to contend with being a modern career woman trying to navigate the complex social scene of the Regency period, make sure no one discovers her real identity and unmask a charlatan. But all of these are easier than resisting her undeniable attraction to the Earl, who is clearly determined to sweep her off her feet.

Laurie Brown has penned a thoroughly enjoyable foray into the Regency period, and she does it with a twist. Take the Regency, with its rules and rigid style. Throw in a thoroughly modern woman who time travels due to the machinations of a very appealing ghost and you have the recipe for a delightfully funny and sexy read.

The reader will join in Laurie's confusion as she finds herself drawn not only to the intriguing ghost, but also to his live alter-ego, who is equally as intriguing and appealing. She will have to choose between them and the ending Ms. Brown provides for us is completely satisfying.

The romance and sexual tension heats up nicely and the consummation is all anyone could hope for. I am very pleased to have discovered this author and plan on looking up her backlist.

NOTE: If you want a chance to win this excellent book which will be released tomorrow, just leave a comment on this post. Comments will remain open until midnight Eastern Time, Friday, October 19, 2007 for entries. Drawing will be held on Saturday 10/20/07.

Review by Rose
Posted by Long and Short Reviews at 8:44 AM