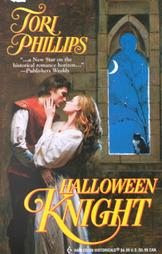 Sir Mark Hayward had sworn never again to cross paths with Belle Cavendish, for though she was the daughter of his liege lord, the young she-devil had been the plague of his boyhood. But when Brandon Cavendish offered to make him a landed knight in return for rescuing his precious Belle, Mark could not refuse.

With such a prize at stake, how hard could it be for a clever knight to spirit one young woman away from her captors? How hard, indeed! For the ungrateful Belle refused to leave. And suddenly the simple rescue had become a full-blown invasion, with mischief and mayhem and a devious plan to rid the castle of all its vermin at a haunted banquet one Halloween night!

Halloween Knight was the first historical romance I’ve picked up, but it won’t be the last! This tale of a spirited young widow who is held captive by her brother-in-law, and the dashing playboy who is hired to rescue her, is a quick, enjoyable read: perfect for this time of year! Belle Cavendish and Mark Hayward grew up together, but it’s been eight long years since they’ve laid eyes on one another. Now, Belle is being held against her will by the evil Mortimer Fletcher, who wants to steal away Belle’s rights to Bordiam Castle along with her priceless family brooch. Belle’s father, Sir Brandon Cavendish, sends Sir Mark Hayward to save his daughter and promises Mark an estate of his own if he is successful.

Of course, the moment our handsome knight sets foot at Bordiam and sees Belle again, they both realize that a childhood flirtation has turned into passionate attraction. But Mark is up against a worthy enemy in the rescue of Belle. Along with his African helpmate, Jobe, and Belle’s younger brother, Kitt, he must find a way to prove the castle is haunted and scare off Mortimer before he destroys Belle once and for all.

Together, the characters join forces to run Mortimer and his cronies out of the castle, thanks to some nifty tricks and “hauntings” at the All Hallows’ Eve Ball. Just when the reader thinks Belle will finally be free, however, circumstances turn against Mark, and our hero finds himself in the hands of the enemy.

Belle is a charming heroine, beautiful and determined. Though she seems self-centered at first, she quickly realizes the only way to prove her love for Mark is to stand up for him, which she does at the end of the story in a surprising, wonderful plot twist. Mark is handsome and charismatic; he wins the hearts of every woman he meets, and his greatest challenge is to resist temptation and stay out of Belle’s bed. Every scene where these two characters are alone together is hot!

I enjoyed this book very much. Once I adjusted to the language of a story set in 16th century England, I found myself fully engaged in the plot. I cheered for Belle and Mark to put aside childhood arguments and end up together. I laughed at the antics of the minor characters. I flipped pages to find out the next plan for convincing superstitious Mortimer that his castle was haunted. And I was satisfied by the ending, especially Jobe’s role in bringing the hero and heroine together. The entire story portrays a wonderful time period when ladies were meant to be cherished, and men were handsome heartthrobs who lay down their lives to do so.

The only issue I had with Halloween Knight is that it is part of the “Cavendish Chronicles” series, and so there were unfamiliar characters and plot history. The author fills in the blanks well enough, but unless you’ve read the other books in the series, you may feel as though you’re missing out on some central information. However, the story stands alone well enough and was a wonderful introduction to historicals for this reviewer. I plan on checking out more books by Tori Phillips and hope they are all as engaging as Halloween Knight!

Review by Dandelion
Posted by Long and Short Reviews at 1:06 PM