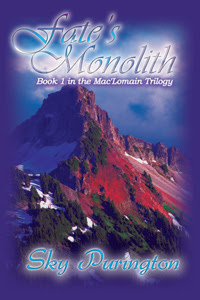 Arianna Broun, a Scottish born colonial American has been haunted by the reoccurring dream of a phantom Scottish warrior. Her infatuation with the dream intensifies until All Hallows’ Eve, when the veil between the worlds is at its thinnest. After several bizarre encounters she runs to her safe haven deep in the woods. When dawn comes too early, Arianna is eager to go home. But fate has other plans.

Laird Iain Mac’Lomain has long awaited the arrival of his promised bride. She claims to not be the woman intended for him but she fits the description given him of her, all fire and defiance. That defiance will end up costing them everything and rips them apart. However, a Scottish Chieftain with magic at his disposal is capable of most anything. Will he hold Arianna in his arms again or is she lost to him forever? Only time will tell.

Fate's Monolith started out well. A mysterious man invades the dreams of Arianna Broun. Then one Halloween night the stranger becomes real as she finds herself transported from 1799 to 1199.

The author wrote beautifully of Scotland. Her prose was quite lovely and descriptive. The chemistry between Arianna and Iain was believable and I was rooting for them both. The only complaint I had at this point of the novel was much too contemporary dialogue and the use of such words as "Neanderthal" and "subconscious" by 12th century people (that drives me nuts!). But this is more a fantasy novel than historical so I pushed those things out of my mind. I was very much invested in the story.

Then...The last 100 pages or so of the story had me scratching my head. Where was the lovely descriptive prose? There was a lot of telling not showing, a backstory that did nothing for the plot and an explanation of the Gregorian calendar that was unnecessary. It all just sort of fell apart for me.

Even so, I'm giving this 3 books because there were many enjoyable moments and I cared very much about Arianna.

Review by Sunflower
Posted by Long and Short Reviews at 4:01 PM