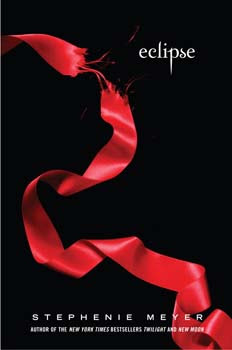 As Seattle is ravaged by a string of mysterious killings and a malicious vampire continues her quest for revenge, Bella once again finds herself surrounded by danger. In the midst of it all, she is forced to choose between her love for Edward and her friendship with Jacob—knowing that her decision has the potential to ignite the ageless struggle between vampire and werewolf. With her graduation quickly approaching, Bella has one more decision to make: life or death. But which is which?

Have you ever used the word ‘devoured’ or ‘inhaled’ to describe reading a book? No truer words were ever spoken because that is exactly what I did. I started in the morning and didn’t stop until after the sun had set. My housework was ignored and the TV held no fascination for me what-so-ever.

This third installment of the Twilight series has been eagerly awaited by me for months. I originally got hooked on this series based upon the enthusiastic recommendation by my town librarian. I, as a rule, do not read YA, but this series has me rethinking that stance. Stephenie Meyer has me reconsidering my choices. Eclipse continues to have me totally engaged in the world this author has created and I am ravenous for more.

Belle is a young woman about to graduate from high school and has a very unusual boyfriend; he’s a vampire. She also has a very serious and odd choice to make - life as a human or un-death as a vampire to be with Edward forever.(To be or Not to be) Another of the many complexities haunting her life is a vengeful vampire vixen hell-bent on destroying her because Edward killed the vixen’s boyfriend to save Belle in a previous book. Belle certainly has some issues beyond the normal teenaged angst during their last year in high school.

On top of that, there is a skillfully crafted conflict which had me in suspense for almost the entire book. Both of the culprits suspected were introduced in past books and I could never figure out who it was until Stephenie wanted me to. Oh, Belle kind of figured it out, but I was never sure if she was right or not until the big finale. And, what forces came together during those last few chapters! They were simply amazing and engrossing as I watched the relationships evolve and lead up to all that excitement!

As for Edward, he’s just a tad too old for her by a couple of generations (he doesn’t look it though!) but he loves her with a caring and intensity that pleases the heart of any romantic. I mean, when a guy says, “I’ve been waiting for you all of my life.” how can you not just melt? Ok, so he’s been waiting for more than a normal lifetime but still, how dreamy.

Jacob is a family friend Belle has known for years and who is a werewolf. He also loves Belle. At the ending of the last book, I was in tears for Jacob. Oh my gosh, how I hurt for him and Belle. The beginning of Eclipse didn’t waste time addressing nor does it sugar coat this heartrending situation.

The thread of the story is picked up and continued seamlessly, and in no time at all, I was back in her little town in Forks, Washington. Would Jacob, and me, be soothed or would his hurt continue? Did Stephenie resolve this? The answer is a little bit no and a little bit yes. I am having a hard time not sharing spoilers. Let’s just say that it was resolved the best it could be and still remain true to the intent of the story.

And Edward? I had my share of sniffles for him too in the last book, and in Eclipse I’m even more impressed with him, more convinced that he is Belle's true love. So, yeah, he’s dead but love is alive and vibrant. Yet their path is not easy. Belle and Edward definitely don’t have it smooth and uncomplicated -– on so many levels. You might be thinking I should give you specifics but I can’t. I mean, this book is just over six hundred pages. How do I condense the highlights when there are so many? Guess you’re going to have to read it.

I should mention that I adore Edward's sister, Alice, as well. And we get a clearer picture of Rosalie and Jasper in this book. Their histories were fascinating and I’m glad they were included in the story.

Belle’s dad, Charlie, is such an adorable man: simple and loving -- yet Stephenie had me laughing when he attempted the ‘sex education talk’ with Belle. Poor guy. *grin*

The dialogue is tight and convincing, real and touching. At no time did I feel it lagged or was off topic. I didn’t experience any head hopping or jarring incidents. This book read like a dream and I can’t recommend it enough.

If you thought New Moon was good, Eclipse takes you even further with characters, plots and emotions in a world woven in a rich tapestry of human and not-so-human drama. This is YA at its absolute best. Consider me converted.

Reviewed by Xeranthemum
Posted by Long and Short Reviews at 8:02 AM