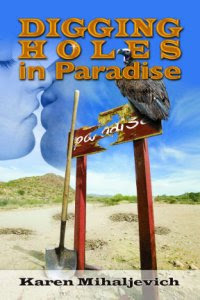 One lie leads to another in this playful historical romp until the characters have dug themselves in so deep, they may never be able to dig out!

Missouri, 1859
Josette Stratton insists on being her own woman. To avoid an arranged marriage, she adopts the identity of a woman who has died, takes the woman's stagecoach ticket, and heads for the untamed Nevada Territory to assume the woman’s position as a seamstress.

Meanwhile, in Nevada City, a madam sells raffle tickets for one lucky man to spend the entire night with the new prostitute who is due in on the next stage.
Naïve Josette is horrified to discover, on her first night in town, that “seamstress” is just another name for...oh my God! A gunslinger named Wolf makes her an offer, but why exactly would he need an “employee”?
Nevada’s Comstock Lode bonanza adds color and excitement to this fast-paced adventure.

Welcome to 1859 Nevada Territory where the Comstock Lode is the talk of the day. So is selling raffle tickets to spend the night with the newest prostitute to step off the stage.

When Josette Stratton leaves Missouri to begin a new life out West, she needs to take on the identity of a dead woman and her dearest friend, Polly Portain; you see she is running from being sold as chattel to a man whose beliefs put him in direct opposition to her own about slavery.

Answering an ad for seamstresses needed in Carson City, Nevada seems like the new start she is hoping for but once she arrives, it is to discover that “seamstresses” is a euphemism for prostitutes. Appalled at the misunderstanding, she is soon approached by a gunslinger, Wolf, who makes her a proposition.

Wolfgang Wacenski, otherwise known as Wolf, is on his way to Carson City to cement a business deal, a deal which goes south when he learns a day late that the business associate he was to meet has died. Traveling by stage to Carson City with a variety of characters is not his idea of entertainment; in fact he would rather be on his horse or selling his new wares to the miners. If he doesn’t get his business up and running shortly he will be in debt to his partner for a very long time. He didn’t expect to get caught up with a woman on her way to become the newest whore at Madame Boudreau’s Lions Inn.

A screwball comedy beginning with “Lil’ Joe’s” bath to the end, Digging Holes in Paradise is one moment of hilarity after another. With some emotional moments thrown in for balance, this is an amazingly wondrous romance! Josie is an admirable woman who is not afraid to fight for what she believes. Hopping a stage to an unknown future is a brave and, it turns out, smart thing to do. Her exploits are realistic and garnered great respect from this reader. Wolf, on the other hand, is a man any woman would love to call her personal hero. He is the strong silent type with hidden depths yet to be plumbed. It takes our innocent heroine to bring out the best in him, and his best is worthy of a hero to top the charts.

The chemistry is not apparent in the first meeting, but soon becomes palpable to the reader as the pair is thrown together. He helps her forge a future in the West, all the while making her believe in her own talent, worthiness, and intelligence. Josie is a woman many readers should identify with; she is unwilling to live in a loveless marriage, unable to voice her opinion on anything so sets out to make her own way in the world. She contributes the qualities missing from Wolf’s lonely existence, making him fall more in love each day.

A wonderful love story with a well developed cast of characters, Digging Holes in Paradise by Karen Mihaljevich is a book I will savor again and again.

Review by Wisteria
Posted by Long and Short Reviews at 1:35 AM