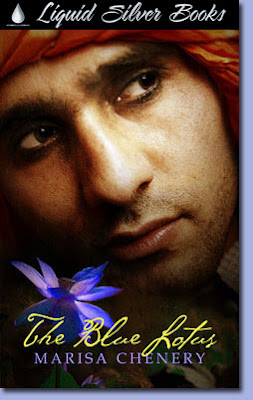 The Blue Lotus
by Marisa Chenery

Kendra Miller finds herself intrigued by the gold pendant her brother sent her from Egypt. She finds the enameled blue lotus flower on it lovely, but the hieroglyphs engraved on the back are a mystery she wants to solve. After innocently translating the glyphs, she sets off a chain of events that can only end in disaster.

Nefertem, drawn to the woman who summoned him, knows his love for Kendra can only lead to heartache. Being bound to the pendant, his stay in her world is limited.

Together they try to stop the disaster Kendra has unwittingly set in motion; Nefertem fights the changes taking place inside him. If they fail, Kendra may pay for her actions with her life.

Chenery's "The Blue Lotus" is a contemporary romance that cleverly draws on elements that are both paranormal and somewhat historical. Even someone with only a vague interest in Egypt or its artifacts will recognize some of the references here.

Early on, anticipation builds around a gift that is not exactly what it seems to be. The gift, as one suspects, does become central to the plot.

This is a curious tale, and Chenery adds a bit to the puzzle by allowing readers glimpes of the other main character's perspective on the unfamiliar world he finds himself in. Nefertem is an enigma, even when are shown his perspective.

Settings are not particularly well described, but are relatively unimportant to this tale, which relies on the the interactions of the characters to carry the plot. The dialogue, like some perspectives, seems odd at times, but needs to be, in the face of strange, even mystical occurances. Sexual scenes are powerful and well-written, fitting well with the plot.

Despite editing errors that tend to pull the reader out of the story, this paranormal romance is intriguing -- largely because it uses mystical elements that are offbeat, even among other paranormals.

Review by Snapdragon
Posted by Long and Short Reviews at 6:11 AM