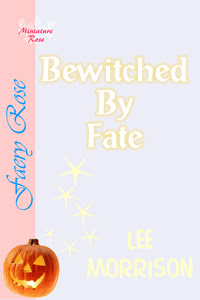 Bewitched by Fate
by Lee Morrison

After five years of seclusion on Earth, Lucas Black, a warlock of living legendary status, realizes he can no longer deny his daughter her heritage, and agrees to return to Leto Island for the annual Halloween Festival. What he didn’t count on, was coming face to face with Ashley Stevens, the enchanting witch who began haunting his dreams a year ago. Will Lucas accept his fate with grace this time around? Or will he return to Earth and close the door forever?

I realize I'm using a cliche, but if you were to go a librarian's house for Halloween and say, "Trick or Treat!", I figure you'd get a book. Certainly I'd consider it a major treat if that book were Bewitched by Fate. Non-fattening too! *wink*

I was charmed by this story so completely that I would enjoy visiting this fantastical land again. The fact it's hidden in a black hole is unique for the type of story this involved. No space aliens, no starships, just witches and warlocks in a world in which they are the norm. And yet, as far out as that sounds, the main hero, Lucas Black is as human as a man can be.

Lucas is a father of a teenaged daughter. She is the ONLY reason he pushes himself to do things because she's the only person worth it. Seems he's lost his way since his wife died and doesn't much care about himself. Only, he can't see it and doesn't that smack of reality?

He's a charismatic and powerful man who is mired in memories. He's also starting to feel a bit guilty for enjoying these certain dreams, not realizing that his time of grief induced selfishness is about to end. Or maybe he does realize it and is fighting the knowledge ... maybe that's a 'martyr syndrome'? I bet we've all been there for one reason or another to various degrees. But something usually manages to come around and kick us in the seat of our pants to wake us up, right?

His kick comes from the delightfully female figurative foot of Ashley Stevens. She's a witch who teaches young witches and warlocks-to-be about what is truly important about who and what they are. She guides them with an earnestness and enthusaism I wish teachers had more of in our real world. The fun twist is that she appears in those dreams that haunt Lucas. Who says dreams can't come true?

Lucas' daughter, Erin, is the catalyst that brings the stubborn man/warlock and the patient and beautiful woman/witch together. Yet, never does this scenario feel contrived or forced. It flows naturally. I appreciated how the author set up Lucas' capitualtion because it didn't drag on and on and when it finally happened, it made sense.

At the end, I felt happy for Erin the most because, believe it or or not, I thought she got the best benefits out of her father's healing. This is a sweet and uplifting story. If you get overwhelmed by the spooks and hauntings of Halloween, Bewitched by Fate is the cure.

Review by Xeranthemum
Posted by Long and Short Reviews at 6:05 PM