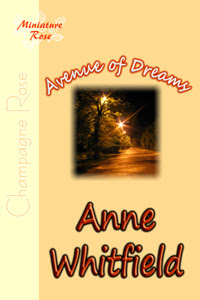 Avenue of Dreams
by Anne Whitfield

Molly Daniels is summer holidaying in a small town in the country to recover from a broken marriage. She’s hurt, disillusioned and unsure of her future. She last thing she is looking for is a man.

Sebastian Lord is the town’s most eligible bachelor, a title he hates. Having given up on a successful career in the city he now owns a small farm and is content to hide away there, away from the real world that has hurt him in the past. Since his fiancé was killed four years ago, he’s refused to enter the dating game again.

They’re an unlikely pair, but Seb’s wayward dog has a habit of bringing them together. They give into their attraction and share a hot summer together, but can they let go of the past enough to embrace a future together?

Anne Whitfield's lovely short story, "Avenue of Dreams," is unexpectedly eventful. The serene opening makes some of the ensuing action quite a surprise.

Delightfully descriptive prose sets a charming stage that suddenly becomes hotter than hot. The main character, Molly is both likable and well-developed. Her love interest is a surprising and unusual person, even if all one considers is his array of pets. Molly's resistance to that fellow is the only real conflict within the story. This leads to the story's one shortcoming: the interactions of the main characters seem overly fortuitous, or obviously contrived.

At times, this is a quaint and entertaining read, with the main character reflecting on sun-dappled leaves. Then, the storyline will leap to hot action out behind the barn. "Aveneu of Dreams" is enjoyable, and the sharp contrasts between serenity and sex will leave any reader a bit breathless.

Review by Snapdragon
Posted by Long and Short Reviews at 9:45 AM