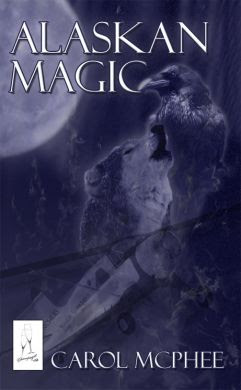 Determined to counter the sudden upheaval in her life, ex-socialite Amanda Bennington adds to her difficulty by trying to cope at her aunt's run-down lodge in the Alaskan wilderness. Complications from a vengeful raven, an environment she doesn't understand, and a scruffy bush pilot, who resents Miss Hoity-Toity's intrusion, would catapult her out of the state, if not for her compulsion to learn a family secret

Alaskan Magic is a touching story about two people who find love later in life, after first marriages have ended and broken hearts have caused Amanda and Layne to retreat into themselves. It was refreshing to read about a hero in his 40s and a heroine in her 50s, both attractive and sexy and desirous despite their graying hair and saggy middles. Theirs isn’t the only love that unfolds in this story, though. The author does nice work with a number of “untraditional” partnerships and shows the reader that true love comes in many different packages and at many different times in life.

The wilderness setting of Alaska is a good choice for this novel. It is a magical place for romance to unfold, and Carol McPhee does a thorough job of showing us the beauty and the danger of the Alaskan landscape. From wolves, to a resident moose, to a wounded grizzly bear, to a raven that may or may not be the reincarnation of a Tlingit native woman, wild animals fill these pages! Yet each has a purpose, and the way that the characters all learn to co-exist with nature is heartwarming.

I have to say, however, much of the dialogue in this novel was stilted and awkward. For me, that was the chief drawback in enjoying this story. Every time the author drew me into the romance or the conflict, I’d find myself jolted out a few pages later by the overly formal or clichéd dialogue. Even the characters’ internal dialogue sounded more like carefully formed explanations for the reader, rather than true scattered thoughts.

Otherwise, Alaskan Magic is a sweet novel set in a remote, beautiful location. Carol McPhee shows her readers that love is tough, takes time, and can even be heartbreaking – but sometimes, it can also redeem you long after you thought hope was possible.

Reviewed by Dandelion
Posted by Long and Short Reviews at 6:31 AM