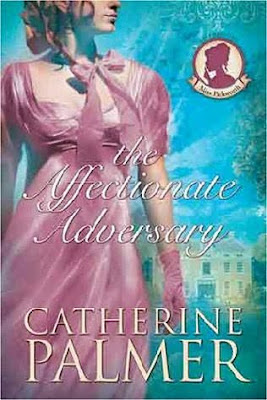 The Affectionate Adversary
By Catherine Palmer

She is determined to be rid of her fortune. He is driven to gain the riches he’s always dreamed of. Bound by love . . . torn by wealth . . . their hearts must pay the price of true devotion.

All of high society is abuzz with the arrival of the man who miraculously survived a pirate attack at sea. Little do they know that more than riches were stolen that fateful day. For it was then that Sarah Carlyle stole Charles Locke’s heart.

But now that they are safely back at home in England, they discover that perhaps love is not strong enough to hold their lives together. And was it ever truly love anyway? Perhaps Charles was only after Sarah’s wealth.

Society tattler Miss Pickworth has a thing or two to say about that. But as she entertains the elite with the latest gossip, Sarah and Charles must search their hearts and choose between their passions and their ambitions. . . .

The Affectionate Adversary was the first in a three book series set in Regency England. It delved deep into the high society of the time period, but from a Christian view point. There were times when I grew a little impatient with Sarah Carlyle, the herione. But not in the way I have been impatient with heroines in other books I’ve read. Sarah was not the kind to stamp her foot and throw temper tantrums when she didn’t get her own way. And I really liked that about her. There were things she needed to work out, and those frustrating things about her only added to her humanness. She needed to grow in her faith and understanding of what God really asks of His children. In the long run, I found her sympathetic, and wanted nothing but the best for her.

Charles Locke, the hero, was a kind man, and oh so patient. I don’t think there was a single moment when I wanted to kick him in the pants, although, he had his faults as well. I think, for the most part, the characters were well-rounded and realistic. The setting seemed painstakingly researched, as was the history of the time. I felt I was there, living it out, mixing with “the ton” and learning a few more things about the Regency era in a fun, enjoyable way. Women of all ages would enjoy this book, and I highly recommend it.

Reviewed by Violet
Posted by Long and Short Reviews at 3:02 AM