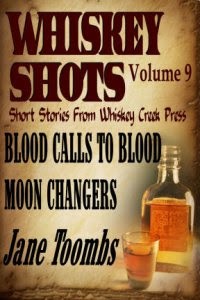 Blood Calls To Blood: Maire Nigend, forty plus and flat broke, can't believe her luck when she inherits a remote family estate—complete with lake. She's aware nobody gets something for nothing. Still, all she's required to do is, on Midsummer's Eve, build a bonfire on the shore of Lake Grendel and carry out a simple ceremony. No problem. Or is it?

Moon Changers: In California, Weylin Lupin's epiphany during a revival meeting leads not to the church, but to regaining his health by naked moon bathing. Others join him. Jacqui Somalio joins the group against her father's wishes, earning Weylin a dangerous enemy. Worse, one night under a full moon as the group chants, "Change! Change!" something in the nearby woods howls in answer…

Jane Toombs explores family ties and the boundaries of the paranormal genre in the mini anthology Whiskey Shots Volume 9.

The first story, Blood Calls to Blood, features Maire Nirgend who arrives at the family estate she is to eventually inherit only to find it comes with a legacy that will either become her greatest pleasure or her ultimate undoing.

It took a few paragraphs for me to get into Blood Calls to Blood. There were long sentences laden with lots of facts and back story. Once I got past that, though, I was well and truly hooked. The story had a gothic feel to it and Ms. Toombs does a great job of mixing big revelations and little twisty shocks which keep the plot on track and the reader off balance. Insinuations of incest may disturb more sensitive readers. Blood Calls to Blood will appeal to fans of old school gothics and the work of V.C. Andrews.

In the second story, Moon Changers, Weylin Lupin forms an alternative religion around the healing powers of the moon. Through it, he meets and falls in love with Jacqui who comes with an angry papa who has violent connections. In his struggle to keep Jacqui, Weylin discovers a long lost brother and the family secret that kept them apart.

I thought Moon Changers was the stronger story of the two. There were no long blocks of info-dump this time, and the pace is peppy. There were multiple point of view characters, but no confusing head hopping in the middle of scenes. Without giving away any fun surprises, Ms Toombs mixes two seemingly incompatible motifs to great effect. Moon Changers will appeal to fans of werewolf stories, particularly the work of C.T. Adams and Cathy Clamp.

The stories in Whisky Shots Volume 9 aren’t classically paranormal romance. I would categorize them as dark fantasy with romantic elements. But they’re so interesting and well-plotted that they’re definitely worth your time.

Reviewed by: Daisy
Posted by Long and Short Reviews at 4:21 AM