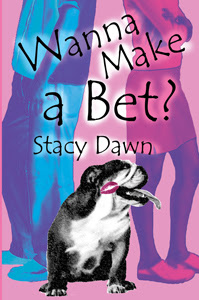 When aspiring artist and purposefully single Sophie Montgomery mutters those four fateful words, her sexy neighbor, Jay Coltrane, pounces on the opportunity to prove she’s not as immune to him as she thinks. Before she knows it, Sophie finds herself not only betting against a seduction, she’s betting against her own ability to keep her dreams intact and a certain luscious landscaper out of them.

Wanna Make a Bet is an enjoyable, romantic tale. The book is rich in likeable characters, including a rotund bulldog named Harvey. I love dogs…so whenever I find a story that includes a dog all through the story it's a bonus. Harvey belongs to Jay Deline and Sophie Montgomery is Jay's sexy tenant. The relationship between Jay, Sophie, and Harvey is masterfully written. Harvey is not just a ‘drop in’ pet, forgotten for chapters at a time but a constant through out the book.

The chemistry between Sophie and Jay is much more than “hormone-influenced.” They have a deep friendship, are kindred souls of sorts. Even their ‘issues’ sprout from the same source. In fact, their relationship is so intertwined the reader may never wonder IF they will get together but WHY haven’t they earlier.

Julia and Dan add a nice secondary romance to the story. It’s their pending wedding that prompts the bet between Sophie and Jay. While the reader will never doubt who will win the bet; the fate of Julia and Dan is not always so clear. Julia and Dan’s romantic problems come close to upstaging Sophie and Jay's romance.

I gave this book a three book rating, because while Sophie and Jay’s fate may never be questioned, their issues need to be resolved. These issues supposedly kept them apart, yet they are resolved almost instantly at the end of the book. I feel Ms. Dawn may have cheated the reader in this. Personally, I would have like a better understanding of how the resolve came to be, because I did like Sophie and Jay.

Reviewed by: Magnolia
Posted by Long and Short Reviews at 8:13 AM