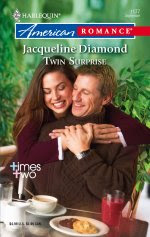 The scars from Marta Lawson's near-fatal accident have faded, but she still doubts her ability to attract a man— never mind one as handsome as the Villazon police department's Derek Reed. But when the sergeant comes up for auction at a charity event, her friends have the winning bid—and a dream date with the blond poster boy turns out to be her birthday gift.

Finding herself in the arms of the charismatic cop is so intoxicating she throws caution to the wind, and she's not totally surprised a month later when her doctor gives her some (doubly!) electrifying news she dreads sharing with the elusive bachelor.

But he's hiding a surprise, too. Will it break them apart— or bring them closer together?

I was very excited to receive Jacqueline Diamond's Twin Surprise, which is being released today. I thoroughly enjoyed this sweet romance, even though the heroine, Marta Lawson, seemed almost too good to be true. She holds no bitterness toward her father, who virtually abandoned her after her accident. Her greatest flaw is that she doesn't have a lot of confidence in herself. In her abilities, yes. She has proven those to herself, by supporting herself and putting herself through school. She has a couple of close friends she trusts through thick and thin, but doesn't have faith in her ability to maintain a romantic relationship, due to the self-consciousness she has about the scars on her face and the limp she still suffers from. Friendships, yes. Love, not for her.

Derek, on the other hand, has always been the love-'em-and-leave-'em kind of man. A serious diagnosis from the doctor, however, has changed his perspective on his life. And, once he meets Marta, there is a mutual attraction. With his disease, however, he feels like he doesn't have a future to offer any woman.

Seeing the relationship grow between these so very different people from friends to "friends with benefits" to true lovers has the ring of reality. I found myself cheering for them. I appreciated the way Jackie Diamond didn't fall back on the old cliches of misunderstandings between these two. They were honest with each other, even when it hurt. And, even when they were afraid it might damage their relationship.

The only problem I had with Twin Surprise is it was over too soon. I would have liked to have seen more of the couple and more of the suspense part of the story. Even though all the ends were tied up, it almost seemed like it happened too fast. This, however, is the nature of the line, not the fault of the author. I would have liked to see more in the development of her family life and in the reconciliation. Possibly this could be explored in future books concerning the same characters.

All in all, this was a very enjoyable read. If you are looking for some light fare to start the fall months, I recommend Twin Surprise. I give it a four book rating.

Leave a comment on this review to be entered in this week's drawing (ends on 9/14/07 at midnight) for an autographed copy of this book!
Posted by Long and Short Reviews at 9:00 AM