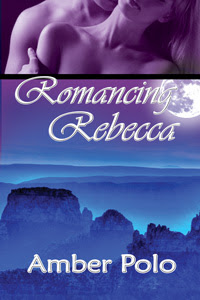 Attorney Rebecca Dumarier uses her no-nonsense style to battle for successful romance writers around the globe. Despite her success in the romance industry, her personal romantic life is a disaster. Sure, she's a high-powered attorney, but can she handle a little broken heart?

Confused by feelings she always keeps hidden, Rebecca jumps a flight to Sedona, Arizona. There she's caught up in the vortex of a mysterious romance with Max, a man with an intoxicating voice, who sends roses, romance novels, and chocolate, but refuses to reveal his face.

To make matters worse, Rebecca thinks she's falling for shy trance channeler Tom Paxton. His precocious daughter and ex-wife/manager complicate the budding relationship until Tom discovers that someone is using his body for romance and his credit card for internet purchases. Investigating an old diary and using her worldly wiles, Rebecca discovers the identity of the man she truly loves.

Now if she can only figure out which man that is.

Romancing Rebecca is an interesting mix of elements; you have your psychic/paranormal, your fish out of water, your workaholic literary insider, your psychic concierge. And let’s not forget the crystals, vortexes, crazy romance writers, head-hopping spirit guides, ancestral diaries, and a precocious harp prodigy. There are a lot of things going on in this book. Luckily, we have the budding attraction between Rebecca and Thomas holding this mélange of stuff together.

I really liked the way Ms. Polo emphasized the friendship between the two protagonists in addition to the physical attraction. So many romances focus on the latter and neglect the former to, I believe, the detriment of the genre. She balanced both well, which made the chemistry that much more explosive. If you’re looking for an alpha male, though, you’ll be disappointed. The alpha character is vilified while Thomas is a sweet, somewhat shy and gentle man. That isn’t to say he’s weak. He just doesn’t carry a club while dragging Rebecca to his cave by her hair.

Romancing Rebecca made me giggle more than once. Rebecca gets herself into some scrapes, and it was fun watching her fumble through the spiritual, laid-back Sedona world when she’s used to the hustle and bustle of New York.

Ms. Polo has a real gift for plotting, but there were a few leaps of logic and some confusing sentences that muddied it a bit. But all was clear by the end of the book. Sometimes there were body parts and inanimate objects doing things independently of people, like jeans climbing, fingers crawling, eyes sliding, phones sobbing. But this is a particular pet peeve of mine, and won’t bother the majority of readers.

One spoiler alert: Rebecca loves to read and, during the course of the story, reveals the end of Outlander by Diana Gabaldon as well as several plot outcomes for the rest of the Outlander series. So if Outlander’s on your TBR pile, you might want to read that first.

Otherwise, Romancing Rebecca is a delightful read and will appeal to fans of fiction with psychic themes, and readers who like their romance with a dash of humor.

Reviewed by: Daisy
Posted by Long and Short Reviews at 8:14 PM