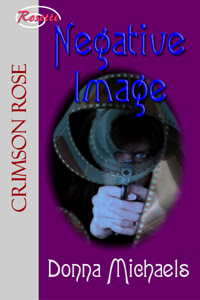 Photographer Lisa Clarke thought working the Senator’s Inaugural Ball would be just another job. But when she inadvertently photographs a serial killer with his next victim, her easy assignment turns into a life or death situation. When the killer targets Lisa, she’s put into police protection and faces danger of another kind. Sexy Detective Dean Jennings.

Lisa and Dean give into their fiery attraction, but their interlude is cut short by the killer. With their wits as their only weapon, will they be able to outsmart a killer bent on revenge? Or will their passion-filled night cost them their lives?

Reading Negative Image is like zipping through a full length mystery to get to the best part.

It's all right here, the culmination of their relationship, the Ooops Factor (you know, when they think they have the case solved?) the action that culminates in a satisfying ending and the belief that the HEA is just around the corner.

This story is so short, I don't believe I got the chance to fully appreciate Lisa's pluckiness. She had to have some for her to keep her sanity after spending a whole month in a safe house.

I would have enjoyed watching Dean struggle against his desire for Lisa while she was under his protection. It had to have been explosive because as you'll read, it was like Roman Rockets going off once the case was officially closed.

The intense passion between Lisa and Dean could only be garnered by inference yet Donna has done such a good job, the reader "gets it".

There's nothing negative about Negative Image except I wanted more!

Reviewed by: Xeranthemum
Posted by Long and Short Reviews at 6:29 PM