Review: Luck of the Draw 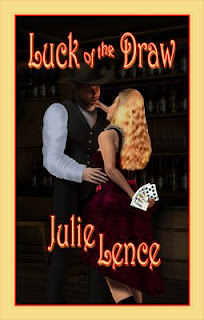 Luck of the Draw
by Julie Lence

Royce Weston has little use for the opposite sex, until Paige Morgan deals him a hand he can’t refuse.Royce Weston knows firsthand women are exceptional liars, especially the one who has wormed her way into his family’s good graces by claiming amnesia. Since Paige didn’t heed his advice at the poker tables, he reasons a bit of “friendly” persuasion is needed to send her packing from Wooded Acres. But when she matches him trick for trick and has his ranch hands jumping to please her, Royce knows he’s met his match. A simpering miss she is not. Sassy and daring; if only she’d give him a reason to trust her...

Royce despises her - Paige knows that much is true. But she’s convinced he knows something about her past, and until he tells her abourt her family, she isn’t going anywhere. And if in the meantime she happens to tame this rough and tough cowboy, all the better. Any girl will tell you, it’s not how you play the cards, it’s the Luck of the Draw that counts.

Luck of the Draw is a light, easy read; a western historical about a woman caught in the wrong place and the men who rescue her and grow to become her second family. Paige Morgan is a likable heroine, especially after the Weston men save her from near-death and take her in. She becomes like a sister and daughter to them, and it is charming to see how each of the men, from the playful younger brother, to the gentle, concerned father, to the rugged and handsome but stubborn Royce, each fall in love with her.

Although the initial conflict seems a bit rushed, once Paige arrives at the Weston farm, the story really begins. Paige finds a new life for herself, trying to fit in with the Westons while also struggling to recall the painful past that has stolen her memory. Unfortunately, I also felt as though the story lost some of its punch at that point, and so the first third of the story moved rather slowly.

When Paige and Royce spend time alone at the farm, though, the reader finally gets to enjoy the simmering heat between them. It is a treat to watch the hero and heroine, both hurt by people in their pasts, fall in love and realize their self-worth again. The novel’s final showdown, a complex sequence of kidnappings and card games, is tense and well written, providing a satisfying conclusion. I’ll take a tough, sexy cowboy like Royce standing up for my honor any time!

Aside from a few point of view slips and some uneven pacing, Luck of the Draw is an enjoyable read, especially once the romance between Paige and Royce heats up.

Review by Dandelion
Posted by Long and Short Reviews at 7:46 AM