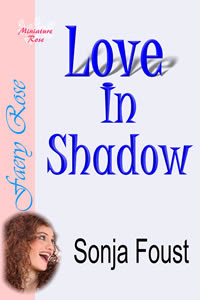 Love In Shadow
by Sonja Foust

Vivacious tomboy Shadow is in love with her boss and best friend, Lon, but loving him is complicated for other reasons. He's the widower of a beautiful woman, killed in a highway robbery by Shadow's own people, the fairies. Now, almost five years since her death, fairies attack their wagon train again, and this time Lon bears the brunt of it. Shadow has to leave, for Lon's good and for her own, since she'll never be able to atone for the sins of her people. Lon couldn't possibly love her in spite of everything? could he?

Love in Shadow is a short glimpse into a world where fairies are commonplace, and typically unkind and much persecuted. Shadow is a fairy who has left her own world and people behind. She works for Lon, and has since before he was widowed. His beloved wife was killed by fairies, and no one is able to forget, even Shadow who has fallen in love with him.

Lon is an amazing man of strong character, and it’s easy to see why Shadow would love him. She is a tomboy with a smart mouth, but is deeply devoted to Lon and his children. She would happily sacrifice anything for them, if she thought it would keep them safe and happy.

Overall, I enjoyed this story. It has some head-hopping, and one character who is inconsistent in his behavior toward fairies, but these things didn’t ruin the story – though they did take me out of it.

Still, with personable characters (especially Lon!), and an interesting plot that leads the reader down and emotional path and a lovely HEA, this quick read will bring a smile to your face.

Reviewed by: Poppy
Posted by Long and Short Reviews at 8:15 AM