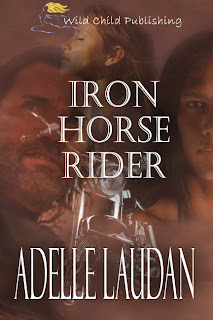 After losing his wife in a terrible motorcycle accident, Shane flees from everything and everyone that reminds him of Kelly. He discovers solace in a summer Micmac camp, and with the aid of Chief Gray Owl and the beautiful Tia, Shane's heart begins to heal.

However, even paradise can turn chaotic. To save Tia from a man she fears, Shane is sent on a quest. Throughout his journey, he learns that sometimes friendship comes from the most unusual circumstances, that love never dies, and anything's possible when you're riding in the wind.

Iron Horse Rider by Adelle Laudan starts with a punch and slams the reader into the story.

Her opening shares a gentle, evokative poem, "riding in the rain.' It is brief, tender, heartfelt. "I don't dwell on days gone by... I look forward to the empty skies..." This brief poem lulls the reader with its gentleness. The visual sense, the emotion shared is incredibly thought provoking and for a moment, we believe in a certain gentleness, a sadness.

Then Iron Horse Rider truly begins; with a visceral punch. The reader is slammed from softness to the harsh, from reflection to horror. The opening is powerful, troubling and terrifyingly believable. It leaves the reader already identifying with the main character, Shane.

Shane's development of a relationship, as well as the camaraderie he shares with an unusual group, all serve to give us a picture of him as a man. He exhibits many nuances of character, especially highlighted as he is one among a group of very tough characters.

The relationship between some of these characters is important and moving. It is also ever-changing; love, loss, recovery, and trust all feature largely in this incredibly moving, but very rough-edged tale. Laudan pulls no punches in graphic scenes or strong language. Yet, the graphic scenes are not superflous, but seem necessary to the work. Throughout, Laudan presents believable action and settings. The motorcycles themselves are well-researched and riding action quite realistic.

The importance of friendship - the depth of that early camaraderie - is a strong theme throughout this work. A curious symbol emphasizes the continued connections felt between people, even after loss. Symbols, hidden meanings, and a connection to the past is confirmed in the efforts of the Native people's roles in this story. The friendship that develops between Chief Grey Owl and the main character, Shane, strongly parallels Shane's own grasp of, and acceptance of himself.

Iron Horse Rider is a study of contrasts, where the person with gentlest of nature seems to come in the toughest outer wrapper. This is a strong and unpredictable read.

Reviewed by Snapdragon
Posted by Long and Short Reviews at 6:56 AM