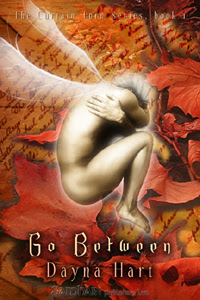 Go Between
by Dayna Hart

Between two races that hate each other, at the doorway between two worlds, can Claire find the strength to be the emissary they all need?

Book One of The Curtain Torn series.

Halfway through her twenties, her divorce, and a bottle of rye, Claire opens her birthday present—a “pressed fairy” book.

One of the fairies is neither pressed, nor a picture. He’s the sinfully sexy Dell, who’s been trapped inside the book for twenty years. The moment Claire frees him, goblins attack her house. Dell and Claire’s only option is to use a “Between”—a rift between their worlds—to escape into the land of Fae.

There, Claire discovers the elven queen, Eliane, has a mission for her—one that has her keeping secrets from Dell. And ousting the goblins from her home is only the start.

Dayna Hart has the beginnings of an interesting fantasy series in this, the first installment of her “The Curtain Torn” series.

The protagonist, Claire, has certainly had her share of misery at the opening of the book and, as I got to know her character, I found myself cheering for both her new opportunities and for her fledgling romance with Dell, the sexy elf who’s captured her heart.

Hart’s story line is imaginative and contains surprises throughout. It’s the type of story that will engage any reader of contemporary fantasy. From the opening through the first half, the story simply explodes with energy. There are twists, emotional highs and lows, danger and new worlds to explore. By the second half, however, the book becomes a set-up for the next installment in the series, and the plot becomes muddled.

What’s missing from Hart’s story is… the rest of the story. This is definitely a part one: much of this book seems to be a set-up for future installments. I’m greatly looking forward to those future installments, as I believe there’s enormous potential here, but I was left wanting much more than I got by the ending of this one.

The other issue I had with the novella is that some of the character dynamics were left in a confusing or unresolved state. There is a point in the story where Claire has numerous revelations about previous actions from Dell, and she keeps stating that “Now, she understands why…” The problem is, I didn’t. I got lost at this point in Claire’s journey. I was also lost by the actions of Eliane, who is either a partner, or an antagonist, or both, and this is another thing that’s still unresolved by the end of Go Between.

While I certainly want a book to leave me wanting more, I felt a bit like Go Between is really the companion book or back story for the next novella in the series.

Dell and Claire are engaging protagonists, and I want to know more about their individual stories and whom they will become during their upcoming adventures. The secondary characters, as well, whom I’m not going to reveal here, because a key character is one of the wonderful surprises of the story, are well-drawn, endearing and intriguing.

I will look forward to the continuing chapters in this series. Would I like to find out what will happen in the future? Absolutely. Did I love this book? Not so much, only because I felt like I needed much more from the characters and the story line by the end of this segment.

Reviewed by: Sunflower
Posted by Long and Short Reviews at 7:17 AM