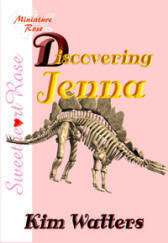 Reclusive children's author Jenna Winslow hides behind her books to keep life from disappointing her. She'd rather spend her time in museums with the dinosaurs she writes about, than with the living…until she meets a man who makes her want to live again.

Matt McCutcheon is confined to a wheelchair but doesn't let life confine him. He's determined to unearth the mysteries of a woman whose physical scars camouflage wounds that go far deeper. But are his efforts to unlock the warmth and beauty inside Jenna enough to draw her into the land of the living?

Kim Watters has written a heartfelt story of hope and love. Discovering Jenna is a short but lovely story of two people who meet quite by accident and change each other’s lives.

Jenna Winslow has had her share of heartache; she has lost her parents, been in a horrific plane crash and her last boyfriend was only using her to become a paleontologist. When she meets handsome lawyer, Matt McCutcheon in her favorite museum she is reluctant to get involved with the outside world. She hides away, writing DeeDee the Dinosaur books for children, her one satisfying accomplishment.

Matt knows tragedy himself; a bullet when he was eighteen put him in a wheelchair, but he doesn’t let it get him down. When he meets the fragile Jenna, he senses a woman hiding immense pain and low self esteem. He also senses a kindred spirit in the young woman, one who shares the connection he feels. What will it take to bring her out of her shell? Will he be the one to unlock the woman hiding behind her scars?

A poignant story of loneliness and pain, of heartache and hope; Discovering Jenna is a lovely way to spend an hour. The characters are admirable in that they value the person behind the imperfections, not looking only at the surface. Matt and Jenna are warm and loving individuals that felt remarkably like friends. Though the story was short, it was a satisfying way to spend an hour; well worth the time spent. Author, Kim Watters has claimed a place on my “watch list”. Her descriptive power allowed this reader to step right into the museum and become a part of this romantic story.

Reviewed by: Wisteria
Posted by Long and Short Reviews at 8:02 PM