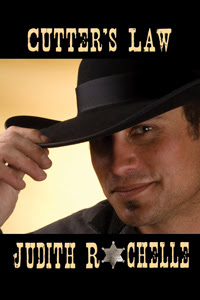 Morgan Cutter’s disastrous marriage has soured him on permanent relationships. Especially with women who think life begins and ends in “the city.” He is perfectly content with his life as Chief of Police in tiny White Tail, Texas, until Allison Moore comes into his life and makes him feel things he hasn’t felt in a long time. A weekend visit to San Antonio with her turns into a catastrophe and convinces him he’d been right in the first place. Allie has fallen in love with the tall, hunky lawman, and has quit her job and moved to White Tail to begin her pursuit of him. Only now his ex-wife shows up with a string of bad guys on her tail!

Judith Rochelle pens a fast paced love story about a city girl and a cynical small town police chief. When the decidedly dissimilar pair comes together, the fireworks are bound to be explosive.

Police Chief Morgan Cutter is cynical when it comes to women. A failed marriage has done a good job of souring him on females; in fact he hates them. His disdain for anything about “the city” is legendary, until a sassy Allison Moore comes to White Tail, Texas when her friend becomes involved with Morgan’s brother. Allison makes Morgan do and feel things he never thought to and it is downright scary to the cynical lawman; he had his heart broken once and doesn’t want to risk it again.

When Morgan takes Allie back to San Antonio, it turns into disaster for them, being the big city and all. Allie determines to capture the wily lawman when she falls in love with the big lug, so she quits her job and returns to White Tail, only to be confronted with Morgan’s ex-wife who has brought trouble to his door. Will she ever change the man’s mind about her city ways, or is the couple doomed forever?

Cutter's Law is a fast-paced and sweet romance with a hero many women would love to tame. Morgan is a wounded soul who is well deserving of the woman who invades his peaceful existence. Allie is no push-over; she is a smart and funny woman who knows what she wants and sets out to get it. The fireworks are explosive whether they are making love or quarreling; the many conflicts in attitudes and lifestyles put Morgan and Allie at odds on the road to happily ever after, with some sexy interludes along the way. With the plot twists and turns and the brilliantly described small town of White Tail, Judith Rochelle has captured rural Americana to a tee. An entertaining way to pass an afternoon, Cutter’s Law by Judith Rochelle is well worth the time spent.

Review by Wisteria
Posted by Long and Short Reviews at 7:35 AM