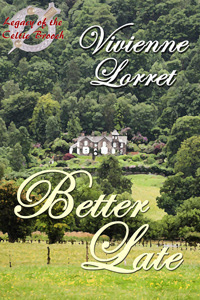 She always wore the brooch as a constant reminder of the man she loved, and the life they never had. Now, after twelve years, she has a second chance.

A twist of fate

He never stayed in one place long enough to form attachments. Now, for the next two months he would battle his greatest temptation.

Looking for a quick read to finish the summer with? A short story that will end the summer on a bright note? Try Better Late, by Vivienne Lorret, the latest short story in the Legacy of the Celtic Brooch series. Each story is a stand alone book, set in different time periods with different characters. Better Late is a contemporary romance.

Sienna Logan knows what she wants and has known since she was sixteen: Rees, the man of her dreams. But dreams is the only place Rees has ended up - so far. Sienna is a self assured character that the reader will enjoy. As with any short story, the word count limits the amount of detail and character development that can be used. Vivienne Lorret does an excellent job of building Sienna’s character within this brief frame work. Sienna had a rocky past but one that she refuses to let hold her down. Where Rees on the other hand hasn’t coped as well. As far as strong rugged hero’s go, Rees falls short but he does have enough endearing qualities to ensure the reader will like him.

The romance between Rees and Sienna is built more on emotion than sexual tension. They are drawn to each other sexually but it’s the emotional bond that is built. While Sienna is sure that Rees is the man for her, Rees is just as sure he is never meant to settle down. Again, for the length of the story, the plot is well developed without large jumps and the back story is filled in nicely. The reader will have no trouble following the story line nor question why Sienna and Rees act the way they do. Just when the reader thinks Sienna and Rees are destined to be together, Ms. Lorret throws an curve into the mix. The reader wonders if maybe the magic of the brooch isn’t strong enough to bring this couple together after all.

Better Late is the only book in the Legacy of the Celtic Brooch series I’ve read but if this one is any indication - the entire series is worth checking out.

Review by Magnolia
Posted by Long and Short Reviews at 7:27 AM