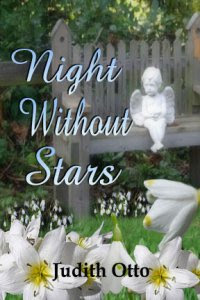 Night Without Stars
by Judith Otto

When Matt Smith asks his super efficient PA to care for his twins while he’s in bed with chickenpox, little does he know she can’t even boil an egg. Very soon, he discovers competent career girl does not equal capable homemaker. He has a feeling he might live to regret his decision.

When Jilly Tremayne’s father ran off with his secretary, she vowed never to become “the other woman.” Now she’s in Matt’s home, in danger of becoming just that. Matt is committed to Claire, the mother of his children. So why isn’t she there for him?

And how can Jilly let Matt down when he’s ill? Or is he?

Not only is she battling her desire to jump into his bed, another battle rages with the twins. They want her out of the house. And far away from their daddy.

Then she steals a kiss…

Ever read a romance story based on the scenario of a boss and his secretary? Here’s another one but with some delightful and unique touches not the least of which are healthy amounts of hilarious humor. There’s this one scene that caught me so much by surprise that if I hadn’t swallowed my coffee, I would have shared it with my PC screen. *grin*

This story concentrates on Matt and Jilly. Matt’s the boss who’s suddenly noticing Jilly and Jilly is his PA, who has always noticed him, but fights against becoming a cliché. Their working relationship is delightful, colored with witty repartee which leaves your own eyes sparkling with humor.

Jilly has strength of character which she has to draw upon as she makes some serious decisions about what she’s willing to do and how far she’ll go in her quest for her boss to notice her. Even after admitting to herself that she does want his attention, she’s still torn. Does she choose between acting on it or walk the higher ground? Ms. Otto could easily have had Jilly do many things other than what she chose. Because of what she did write, it made this a better story readers can relate to as Jilly’s faced with a moral dilemma that is all too common in this day and age. I have to say, Jilly is a very classy lady and I applauded her decision.

As for Matt? He notices her all right. I never knew a hot water bottle could be used as a tool to pursue love. Clever and devious, he too has some choices to make that show us that he makes a wonderful yet very human hero. For a change, this story doesn’t hyper focus on the strong and bold alpha corporate persona but the man behind it. What is a businessman like when he gets home to hearth and family?

I’d be remiss if I didn’t mention Matt’s adorable twins, Sam and Honora. Did I say adorable? Maybe not all the time. They put Jilly through her paces and then some. It was fun to watch how an efficient and put together PA turns into a kitchen disaster just by dealing with two active and opinionated five-year-olds. Even the toilet proved giggle-worthy.

All in all, Night Without Stars is a sweet read for readers who are looking for a passionate romance balanced with fun, family and a couple of appliance malfunctions.

Reviewed by Xeranthemum
Posted by Michele at 6:28 AM